Disappointed with 'Eaten Alive'? Pereira & O’Dell's ad is for you 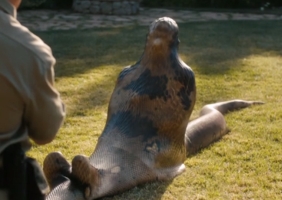 “Eaten Alive” may not have completed the challenge, but the new 1-800 Contacts spot lives up to the task in “Snake,” part of an ongoing campaign via agency Pereira & O’Dell.

Featuring visual effects by Timber, directed by Epoch’s Phil Morrison and edited by Arcade’s Greg Scruton, the campaign uses absurd narratives to capture the real panic and regret people feel when running out of contacts. In “Snake,” an animal control officer weakly attempts to help a man out of a situation that at least one of them finds hard to digest.

Originally slated to run in January, the agency team shifted the airdate when they recognized the intense interest in the show “Eaten Alive”. To further connect the two, the spot’s voice over was then updated to have the snake-eaten man murmur “I hope this makes me famous.” In order to create the all-consuming narrative, the spot was shot with a practical snake created by Legacy FX which began as a 3d model, molded and hand finished.

A Legacy team member assumed the physical role of the man inside the snake, which was manipulated by an external artist using mechanics and a rod during the shoot. Timber then rebuilt digitally using 50 plus photographs to form the model. This was then animated by Timber and composited to blend in with the giant rubber reptile. Timber also digitally recreated the hand of the animal control officer too distracted by his need for contacts to adeptly help the snake-eaten man.

"We always love working with Phil and the people at Pereira & O'Dell were really fun and easy to collaborate with,” says Timber Creative Director Jonah Hall. " We were really excited when we found out that "Snake" was going out early because of "Eaten Alive" because it was such a great context."