Get Up To Speed With A Brief History of Video 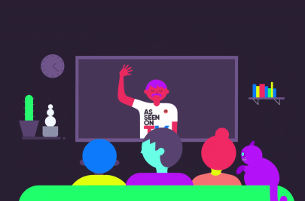 Los Angeles-based multidisciplinary studio Golden takes you on a journey through the evolution of the television landscape and digital streaming as we know it with the animated film “A Brief History of Video.” The lively promo was directed by Justin Harder and animated by the Golden team.

Earlier this year, Justin Harder was enlisted to design and animate a suitably fast-paced montage chronicling “The Story of Millennials” for the on-demand video subscription service.  This time around, Hulu come to Harder with a fun script that encompassed the back-story of the brand, complete with the voiceover, giving Golden the freedom to create the visuals.

Harder and company created a wild ride through Hulu’s history by illustrating each frame – no small undertaking considering the film is over 90-seconds long. The incredibly detailed illustrations, which span whimsical characters, objects, and text, were then melded together via cel animation. The fluid transitions and creative morphing gives the narrative a big, bold personality as the viewer travels through each frame in the sequence. The dark canvas of the background allows the vibrant palette of colors to pop off the screen, illustrating the unique voice of Hulu with artistic yet iconic simplicity.

“A Brief History of Video” is a perfect display of the meticulous eye for design that Justin Harder brings to all his work, be it motion graphic or live action. Harder’s polished aesthetic and multifaceted approach perfectly aligns with the vision of Golden. Founded by Executive Producer Matthew Marquis and Director/Creative Director Jake Banks, Golden provides clients with everything from concept, live action production, design, animation, and finishing.

Hulu "A Brief History of Video" from GOLDEN on Vimeo.