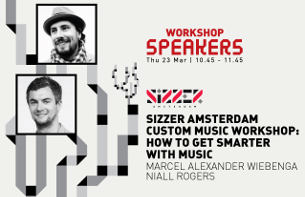 In a hands-on workshop hosted by renowned music agency Sizzer Amsterdam, ADFEST delegates will learn the tools they need to use music as a powerful and emotive tool.

Hosted by Marcel Alexander Wiebenga, Partner & Music Supervisor, and Niall Rogers, Music Supervisor, their workshop takes place during ADFEST 2017 on Thursday 23rd March from 10:45 – 11.45am. Pre-registration is required: to register, simply download this Registration Form and send to Workshop@ADFEST.com

Wiebenga says: “Everybody loves music, most have an opinion on it. It’s an extremely important aspect of a commercial but often it ends up as a mere afterthought. Niall and I will shed light on the briefings, processes and decisions that take place when pairing music with an advertisement.”

“By going through each step of the process we will give an insight into the creation of some of Sizzer’s best projects,” adds Rogers.

Rogers spent four years working between Dublin and San Francisco as a business developer in the tech industry. He DJ’ed at some of Dublin’s biggest nightclubs and Irish music festivals, later joining Sizzer in mid-2016 as music supervisor focusing on Coca Cola’s global ad campaigns.

Registration for ‘How to Get Smarter with Music’ is free for ADFEST delegates, however seats are limited and allocated on a first-come-first-served basis.