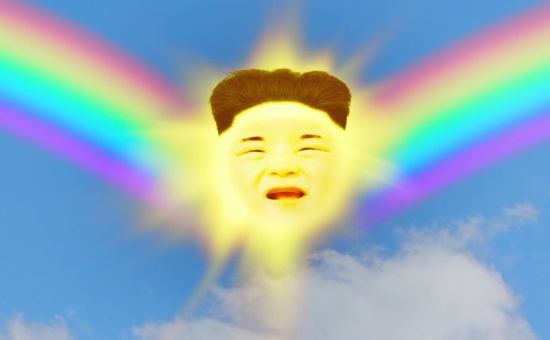 This film from Dear Leader, a new sunglasses brand build, might be the weirdest thing you see all week. The brand has been built around the mission of redefining the meaning of the phrase 'Dear Leader' and to ‘help North Koreans see better', by raising awareness and funds for human rights projects in the DPRK.
In their new brand film, Dear Leader visualise some of the ‘Alternative Facts’ and true lies that the people of North Korea have been fed about their Dear Leaders, Kim Il Sung, Kim Jong Il and Kim Jong Un, throughout the years. Although the film is full of mockery of the North Korean dictator, there lies within a serious message
"All revolutions start with enlightenment and the key to change is information.Dear Leader believe that humour and knowledge of the outside world might be the most effective weapon in their mission to make the repressed citizens fight for their own rights," say the team behind the
If there is something dictatorships hate, it’s being ridiculed - and fear is basically what all oppressive regimes are built upon. When you can laugh at something it stops it from being scary! Funnily enough - Kim Jong Un recently banned sarcasm in North Korea. How crazy is that?
For each pair of sunglasses sold, Dear Leader donates a percentage of the profits to support and cooperate with two human-rights projects working towards the exact same mission – to implode the North Korean regime from the inside, dropping information and entertainment - not missiles and bombs.
Flash Drives For Freedom smuggles flash drives filled with films, e-books and information from the outside world into North Korea whilst North Korean news outlet, Rimjin-gang is the first independent publication, directly reported by the North Korean people.
Dear Leader was conceived after Johan Stahl travelled twice to North Korea in 2006, while working on the film “The Red Chapel”, which won at Sundance in 2010. Johan was also the director behind this brand film. Dear Leader is a collaboration between Michael Aoun (producer and entrepreneur), Johan Stahl (film director and musician), Maria Stumbeck (optometrist and dancer), Kristian Riis (musician and entrepreneur), Nicolai Stahl (founder and creative director of Hjaltelin Stahl), Morten Kirk (entrepreneur and business angel) & Kilo Design.
video
Get Ready For a Whole Load of WTF in This Surreal Spot About Kim Jong Un
view more - Creative