Get Lost in (Tokyo) Translation

From the hottest indie shops in town to the everyday explosion of micro and macro trends, Tokyo is a paradise island for the pirates of design and digital tech 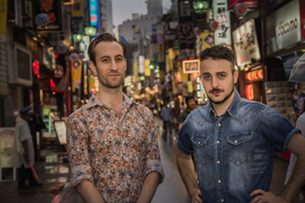 Living in Tokyo means being exposed to trends, tendencies and styles that could send the most experienced of creatives running for a steadier post. But if you’re hungry for an overload of sensory adventures then the city’s an immediate heart starter for designers and digital prophets hunting start-up opportunities in an emerging yet sophisticated market.

Drawn to the big city neon lights, a couple of entrepreneurial expats decided to exit their respective cities (Rome and Melbourne), in search of an island capital known for its glitzy gadgets, noisy billboards and eccentric fashion. Italian art director Riccardo Parenti and Australian communication designer Tim O’Hanlon have been living the Tokyo dream working together to produce Tokyo Graphic Designers (TGD) – a community for designers and creatives with a career lust for the city.

As founder and creative director, Parenti first moved to Japan in 2010. After five years working in the Japanese design industry, he figured it was time to share his experience and impart some lifeline advice to other design foreigners navigating the town’s tricky emotional and geographical landscape. So, when he’s not exploring abandoned buildings in the Japanese countryside, the self-confessed interaction design enthusiast and occasional photographer is fielding questions on how to fit in.

“It’s hard finding work in Tokyo for non-Japanese speakers,” admits Parenti, who launched TGD for this very reason. “On arrival, I didn’t find any real community for expat designers and it was also impossible to find job postings in English. I can now speak Japanese and of course the tech start-up scene here has meant it’s become far easier to find a job, but with TGD still we want to help people avoid some of the situations I went through,” he said.

Moving to Tokyo in 2014, O’Hanlon remembers it took five months to land a job, admitting it was hard to get a foot in the door. Relatively fresh to the industry, with two-and-a-half years experience and a basic level of Japanese, the comms designer recalls it wasn’t quite enough. “There’s also the Japanese resume to contend with – an A3 piece of paper that you must handwrite if you apply for a job with a local Japanese company,” he warns.

Whilst he assures international companies such as Landor or Interbrand are fine to accept a ‘regular’ resume, he says you can’t avoid the overall noticeable divide in marketing practices between the East and the West. “The advertising of local brands in the market is really strong – there are things you just don’t see outside of the country,” he says. “There’s a big market for people who can localise global strategy to the Japanese ad market due to the big differences between Japanese sensibilities and those of the rest of Asia. It’s a great skill to have plus its really interesting work.”

Doing business in Japan, you quickly learn to never really say a straight out “no”… it’s all very indirect and polite, he warns. “Tokyo is a really different place to the West, and my biggest challenge in coming here was the different messaging - you can’t be super bold or direct, and you have to be softer; it’s all about emotional messaging and different colour standards.” He agrees the better work is quite minimal and says some excellent local designers to watch include Kenya Hara and Ken Miki.

With regards to some of the more progressive shops in town, Parenti says it depends by the field, but points to Goodpatch, Team Labo, AQ and Shiftbrain. “Ustwo is opening too so I'm expecting great stuff from them, plus I also like the works coming from Wieden+Kennedy Tokyo,” he says. Canvas.co.jp is another interesting project launched by Tacchi studio – a community/database of creative people in Tokyo, close to the concept of TGD. “I can see all of these creative communities getting closer day by day and hopefully one day becoming one big unified community of creative professionals in Tokyo.”

Off the top of his head, O’Hanlon points to Tokyo-based start-ups adopting leading agile methodologies in their work: create it, test it and make it happen models. He says it’s the smaller shops like Eat Creative, Beacon and W+K who are giving the bigger agencies around town a run for their money. “Dentsu and Hakuhodo rule the advertising world due to their history and clout in the local market and ability to secure deals with big brands, but the bigger agencies are slower and more bureaucratic.”

He explains that Pecha Kucha (the Japanese word for the art of presenting big ideas in a small amount of time, or more affectionately known as ‘chit chat’) is an event taking off in the city. The name sums up what the Tokyo-born, now globally based event is all about, with organisers wanting to encourage groups of designers to quickly show their projects and network with an audience of peers and potential investors.

In general, Parenti firmly believes all kinds of creative – from industrial designers looking for inspiration to fashion designers hunting for the coolest fashion trends – will be attracted to Tokyo. “Japanese design is unique, and being an island, isolated from the rest of the world makes it possible to develop an authentic way to look at things, with different values from western countries,” he says.

O’Hanlon is quick to point out the biggest growth trend in Tokyo is in the tech and digital start-up scene: “There has been a huge explosion of this in Tokyo due to the governments’ recently changed visa laws. More foreigners are feeling welcomed in and their international experience and global perspective is being appreciated. The government wants to encourage the tech start-up community and my understanding is that lots of big companies are very slow to adapt and change so they are not really competitive internationally. Smaller, more leaner business models are starting to explode here.”

So what’s the plan for TGD? “We want to continue to grow our brand and content, with more contributors, articles and features,” says Parenti. “Also our long term goal is to unify all the micro communities of creative professionals in Tokyo to become one big community; organising events, mentoring and supporting people and making Tokyo a better place to stay, invest and live in. Tokyo is easy to live and hard to leave. I mean, after almost six years, I would find it very hard to imagine my life back in Europe. Living in Japan makes you lazy – city facilities are just too good to be compared with any others.”

A bustling chaotic city with a population of over 20 million people hasn’t got O’Hanlon thinking of leaving anytime soon either, as TGD keeps him well- enthused: “We get great responses from people. Last week a friend and creative director who recently contacted us got sent an email from another friend in San Fran who read one of our articles so the work is paying off. It’s a massive market here so lots of companies want to get into Japan. Wantedly is another example of a modern way to find work.”

So, what’s stopping you? The water sounds good.