Editors' Choice: BETC launches programme allowing you to finish watching a film even after your flight ends 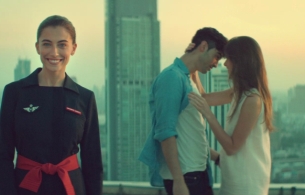 Air France has prepared a little gift for its cinema-loving travellers, by introducing 'Cinema to Go'. Celebrating 36 years of partnership with the Cannes Film Festival, Air France is offering its customers the opportunity to watch or finish watching their favourite films from the 'Cannes Film Festival' selection - even after their flight - on tablet, smartphone or PC with a gift code offered by the company.

The selection was created by Air France and is available on board all long haul flights during the month of May. Some examples of films are the Pianist (Palme d’Or 2002), Persepolis (Grand Prix 2007), The Artist, (Best Male Actor Award 2011) and The Angels’ Share (Grand Prix 2012).

The operation goes live on 7th-21st of May, on a selection of flights between Los Angeles and Paris.