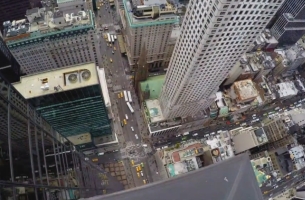 New York Bakery Company is launching a brand new campaign ‘A Taste of New York’ to promote their growing range of bakery products, including the introduction of new Bagel Sandwich Thins. The new TV ad, directed by Ed Morris, sees a man delivering an impassioned ode to his city from the very top of a skyscraper with views of Central Park, The Chrysler Building and the Empire State Building. Filming it himself from up high, we see the camera flit from his face to the views across town, and straight down to the city’s streets beneath him. The denouement, as he takes a bite of bagel at the end is that ‘you don’t have to be in it to feel it, you just need a little taste of New York.’

Karen Revel-Chion, Head of Marketing at the New York Bakery Company said: “More people than ever are enjoying bagels, and we wanted to celebrate the fact that we’re the only brand making them in the original and authentic New York way. In this campaign we also introduce Bagel Sandwich Thins, a lighter way to enjoy them.”

Melissa Robertson, Managing Partner at Now said: “Capturing the spirit of New York has been a hugely rewarding project for us (although less so for acrophobics amongst us). NYB Co is an exciting brand, with an ambitious vision, and we want to get it in the shopping baskets of the nation for them.”

The campaign will be brought to life over the next month through TV, Press, Outdoor, Social and Digital.

It was written by Juliet Kent and Clint Harding, and directed by Ed Morris through Rattling Stick.