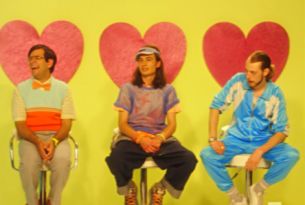 Post-punk band Spring King have released the video for their latest single ‘Detroit’.

Jack comments, "In the first episode we meet three male contestants – Bartek from Kraków, Gary from Manchester and Nikolai from Moscow – vying for the attention of Richmond upon Thames' very own Lady Penelopete. Hosted by cult Greek television star Konstantinos Nestoridis and starring the band as the contestants, Detroit is at once a '90s TV nostalgia trip, a Brexit backlash and a coming of age, gender identity drama that asks the question: How deep is Euro love?”

Taken from their acclaimed debut album Tell Me If You Like To, released in June by Island Records, ‘Detroit’ is a breakneck paced, garage-pop singalong, which follows the BBC Radio 1, BBC Radio 6 Music and Radio-X playlisted single ‘The Summer’. Produced and recorded entirely by frontman - and drummer - Tarek Musa between his self-made studio in Manchester and The Chapel in Lincolnshire, the record captures the band’s growing reputations as a ferocious live band.