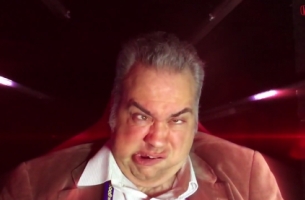 Honda has today announced the launch of #RaceFace, a social and experiential campaign which enables Geneva Motor Show visitors to experience the speed of the new Honda Civic Type R and create their ultimate speed selfie. The initiative was created in collaboration with Lost Boys, part of the DigitasLBi family, and production partners B-Reel.

The initiative aims to create buzz around the launch of the new Honda Civic Type R at the Geneva Motor Show and to position the Honda brand as sporty, innovative and at the forefront of engineering.

Honda and Lost Boys have collaborated with B-Reel to create a special video booth, where members of the public are blasted with a gust of wind representative of the speed of the Honda Civic Type R.

B-Reel created the booth in a warehouse in Hackney before transporting it to Geneva. #RaceFace aims to recreate the experience of travelling at speed in the new Honda Civic Type R, by putting users into the fully immersive experience with sounds, lights and an intense blast of air. A commercial leaf blower, LED lighting rig, audio playback and video capture are all controlled using an Arduino.

The #RaceFace experience is filmed in super slow-motion and captured as a fascinating, hypnotic video which visitors can then share on their social channels.

#RaceFace will run throughout the Geneva Motor Show before being rolled out at a number of future Honda events and exhibitions.

Claire Dunford, European Social Media Manager at Honda Motor Europe, said: “Geneva not only provides a great opportunity for us to create buzz around our new models, but also allows us to tell our story as a brand. This clever initiative really brings to life our commitment to innovation and desire to challenge the status quo.”

Gav Gordon-Rogers, Creative Partner at Lost Boys, said: “Inventing, testing, improving, tweaking. Honda’s engineers have created the most advanced Civic Type R yet. And now we’re giving the public the chance to celebrate it. They’ll encounter the feeling of travelling at speed in a bespoke simulator and leave with a unique souvenir: a slow motion video portrait to share with friends.”