Generosity Gets Rewarded With Free Tickets in Stockholm 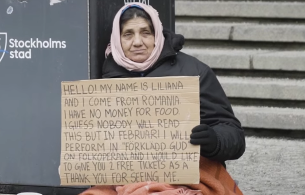 Folkoperan is an opera house in Stockholm, which illustrates how exposed groups are ignored in our society. To highlight the problem Folkoperan chose to let their participants give away 100 desired tickets for free.

On the morning of the 21st of January, several of the EU citizens performing in the show wrote signs about their performance and that they had free tickets to give away. They stood where you would expect to find them; by the subway, outside the grocery store and on many other of Stockholm’s busiest locations.

The whole day they tried to get the attention of the people of Stockholm. Thousands passed by and ignored the message. Not until 12 hours later, one person stopped and read the sign – finally 2 tickets could be given away. The activity was documented with hidden camera.

- We wanted to do something that would make people aware of the problem. In God Disguised we want to give people a chance to see and get to know the people we have made invisible in our society, says Mellika Melouani Melani, Artistic Director at Folkoperan.

The premiere of God Disguised is on the 15th of February and the show will run until the 26th of March 2017.