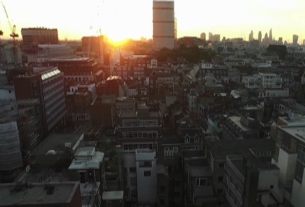 It is believed that the film has been created in order to drum up support for an online protest campaign led by a shadowy figure known only as Fuming Pigeon.

A previous resident of the seventh floor at leading Soho sound studio GCRS, the bird is thought to have been evicted in order to make way for The Lofts, a luxury new development of two sound studios on the roof of the building.

T&T Director Ivor Taylor comments: "Fuming Pigeon reached out to us and asked my business partner, editor and sound designer, Aaron Taffel, and I to think outside the box and create something that would be instantly shareable and capable of moving the needle, creatively speaking.  We ran the idea up the flagpole, got our ducks (or should I say pigeons) in a row and got the ball rolling to create this very scaleable campaign film. Forget Angry Birds, Fuming Pigeon is the real deal."

Carole Humphrey, MD and co-founder, GCRS, adds: "It's going to take more than a flying rat with a camcorder to stop the production of The Lofts, our aspirational new studio space on the seventh floor.  It's going to be home to two new GCRS studios, complete with light, airy, designer interiors and their own roof terraces. So, unfortunately, the previous resident, Fuming Pigeon, is going to have to fly the roost, I'm afraid. End of story."

Studios Three and Four, The Lofts, will be open to brands, agencies, and absolutely no pigeons, from late August.