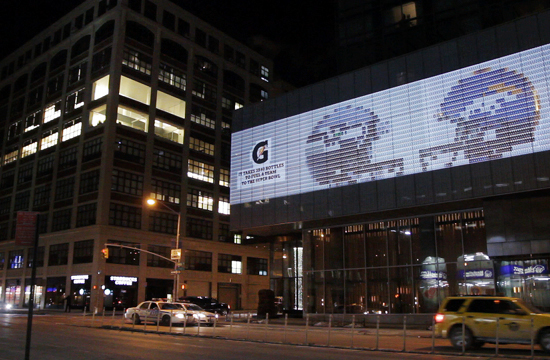 To promote the amount of Gatorade it took to power the Broncos and Seahawks on their way to the Super Bowl on Sunday, TBWA\Chiat\Day placed 3840 bottles on the exterior of the Trump Soho Hotel in New York City.

The bottles feature digital "projection mapping" visualising the journey of both teams through the season. Each of the bottles on the panel is projected with a different Gatorade flavour, as if each bottle were a “pixel." The effect gives the panel the feeling of a 3D animation.

During a typical NFL game, a football team will consume approximately 40 gallons of Gatorade. That equals 160 bottles of 32 Ounce bottles of Gatorade. Through the 24 games a team plays in the season, that equates to 3840 bottles.