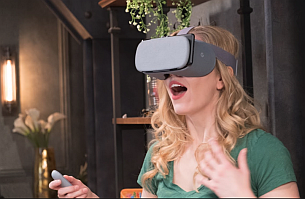 In the spirit of celebrating games of all stripes, Hollywood-based virtual reality (VR) studio Light Sail VR and nerd culture powerhouse Geek and Sundry debuted its VR180 series “Now Your Turn” over the month of April, in partnership with the Google Daydream team.

Each episode of “Now Your Turn” brought players to showdown with different board games and their Geek & Sundry host faves, including Ivan Van Norman, Becca Scott and many more. Viewers slid into the hot-seat with VR cardboard headsets, YouTube’s VR app and Google Daydream to play explosive games including “You’ve Got Crabs,” “NOSH” and their International Tabletop Day feature “Arena: For the Gods!”

International Tabletop Day was created with the goal of bringing the gaming elite back to the table to remind them why they play, and to give thanks to those who make every crit roll of the dice exciting.

Watch  the Light Sail VR and Geek and Sundry’s “Now Your Turn” episodes below and relive your gaming life of yesteryear...or maybe just yesterday.

Who has crabs? Do YOU have crabs? Join host Ivan Van Norman in VR180 with special guests Becca Scott, Leo Camacho, Kate Elliott & Satine Phoenix as they play the fun social deduction game “You’ve Got Crabs” from the creators of Exploding Kittens.

Want to NOSH on some sweet treats? Join host Ivan Van Norman in VR180 with special guests Becca Scott and Vince Caso as they use their hard won allowance to bid on candies, popcorn, ice cream and candy apples in this fun card game from Crafty Games. Hope you brought a big appetite!

Are you a Yogi master? In touch with all your chakras? Join host Ivan Van Norman in VR180 with special guests Rachel Amanda Bryant, Meow Misti Dawn and Havana Mahoney as they twist and contort their bodies in all sorts of hilarious poses to claim the tile of ultimate Yogi in this entertaining physical game by Gigamic!

This game really grows on you! Join host Ivan Van Norman in VR180 with special guests Leo Camacho and Satine Phoenix as they play Danny Devine’s “Topiary” and endeavour to have the best views of these beautiful botanicals!

Welcome to the ARENA of the ALL-POWERFUL!  Join host Ivan Van Norman in VR180 with special guests, Alison Haislip and Jovenshire fighting an epic battle in this strategic game from IELLO filled with divine weapons, magic and equipment!

Binge all these videos for your International Tabletop Day on Geek and Sundry’s YouTube channel HERE.