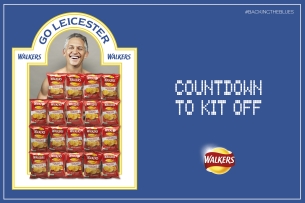 Walkers is showing its support for Leicester City FC in their premiership title race by launching ’Countdown to Kit Off’, a cheeky digital strip tease inspired by Gary Lineker’s much celebrated pledge to present Match of the Day in his pants if Leicester City win the Premier League.

Gary Lineker is being paraded across Leicester, Manchester, and London on digital screens covered from head to toe in Walkers crisp packets. The closer they get to the Premier League trophy, the fewer crisp packets Gary will have to conceal his modesty.

The activity marks Walkers joining the Leicester Mercury’s and BBC Radio Leicester’s #backingtheblues campaign and spurring Leicester City on in their quest for victory by holding Gary to his words. 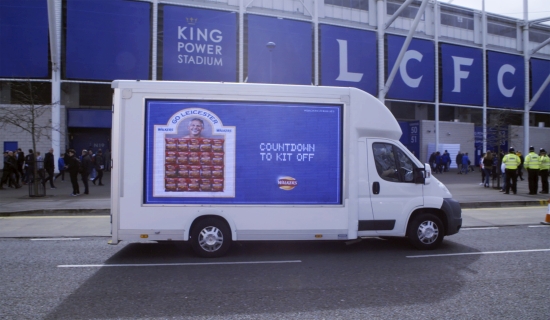 The images will react in real time, so for every game played and every point won, packets of crisps will disappear.

Mobile digital screens will centre around the Foxes’ stadium and Leicester city centre during home games. Digital OOH will also follow the away fans to Manchester and London for the remaining two away games.

Thomas Barkholt, Walkers Marketing Director, said: “Everyone at Walkers is incredibly proud of our Leicester heritage and we’re in full support of our local team. We wish the Foxes the best of luck.”

The digital screens are the first instalment from Walkers to support the Foxes as part of the #backingtheblues campaign and launched on 23rd April. In addition, Walkers is supporting its home team through a partnership with the Leicester Mercury as well as a national digital, social media and press campaign. 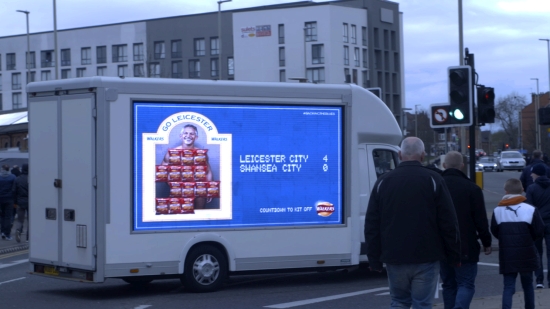