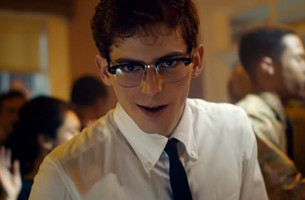 Autumn 2015 marks a turning point in the history of the lifestyle fashion brand GANT. In collaboration with BETC, GANT is repositioning itself with a global advertising campaign that goes back to its roots on Ivy League university campuses and its iconic product, the button-down shirt.

The worldwide campaign includes a film and a gallery of five outdoor visuals that will be featured in the press, outdoor, in cinemas, in stores and on social media throughout the autumn and right through to 2016. The film shows life on prestigious Ivy League university campuses back in the 1950s, from highflying political and artistic ambition and civil rights demonstrations, to partying, sport and love stories. The print campaign celebrates five former IvyLeague students with remarkable careers, each of whom has changed the world in their own way. Five very different personalities united in their attachment to the iconic GANT shirt.

- George Weiner. Founder and CEO of Whole Whale. A digital agency thatl everages data and technology to increase the impact of nonprofits. (University of Pennsylvania, 2001–2005)