Game of Thrones' Sophie Turner Recounts 'The Night Before' for Mr. Burberry 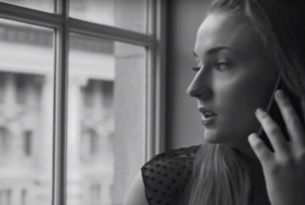 Live today on the GQ Video channel, Condé Nast Britain debuts a new series of three short films in collaboration with Burberry, tying in with the launch of Mr. Burberry, their new fragrance for men inspired by its iconic black trench coat.

The first episode, “The Departure” features the Game of Thrones and X-Men The Apocalypse actress Sophie Turner.

Set in London’s Café Royal the morning after ‘The Night Before’, the film follows Sophie as she recounts meeting a mysterious man the previous evening, providing a fictionalised yet intimate window into the events that led to her waking up in a beautiful hotel suite.

The films, celebrating female actresses, have been co-written and shot by female director Sara Dunlop, whose short film Dreamlands has been nominated at the 2016 Cannes film festival, the only film from the UK to be selected from over 5000 entries. The creative for the GQ films was inspired by the Mr. Burberry campaign.

In an exclusive global partnership across multiple GQ markets orchestrated by Condé Nast Global Development, and with content created by the Condé Nast Britain Video team, the short films will appear on the websites and social media platforms of British GQ, GQ US, GQ France, GQ Italy & GQ Germany.

Dylan Jones, Editor of British GQ: “Another fitting collaboration for GQ Video and the fact that the content will be running across multiple markets says a lot about the quality of our video creation.”