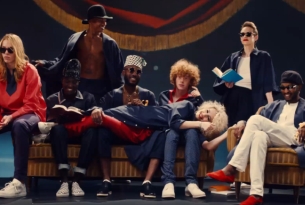 The film shows a selection of memorable photographs which reference Mr Hare’s travels back-projected onto an enormous screen; giving viewers a hint of the visual influences, which inspire Mr Hare’s creative spirit. The film creates audience intrigue with playful props and clever use of light to enhance the details of the clothes and personality of the cast. The collection is worn by models, dancers and actors carefully chosen for their individuality and energy, who celebrate the collection through a range of back stories using both choreographed and spontaneous movement, illustrating Mr Hare’s fabrics and shapes .

Gaëlle Denis, Director, Nexus, says: “We wanted the film to portray Mr. Hare’s journey and progression to menswear whilst detailing the intricacies that make the new collection so special. The aim was to create an encounter for the consumer, to see and feel the human touch of the collection, and even gain insight into where the inspiration for the collection came from”

The film was shot at 50fps and this, coupled with a fast paced edit, combine to create a distinctly music video feel. It leads you to look beyond the surface and see how versatile the collection is in a way that hits the right tone and compliments the brand.