Fusion’s 'As American As' Campaign Gets Some American-Style Censorship

As a response to overbearing censorship, SS+K is releasing the images America wasn't ready for 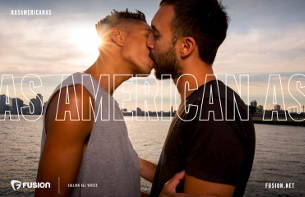 When news media company Fusion and its creative agency SS+K launched the “As American As” campaign, they expected images like gay men kissing, a drag queen standing on her stoop and an African American baby wearing a “black lives matter” t-shirt to spark a public conversation about diversity and inclusion in America. What they didn't expect were for those images to be rejected outright in some of the most cosmopolitan places in America—even on a building in New York’s Lower East Side.

In response to the censorship detailed below, Fusion and SS+K created a new billboard in Manhattan—this time with the censored images crossed out. “X marks the spot of censorship,” the billboard says. “See the images America wasn’t ready for.” 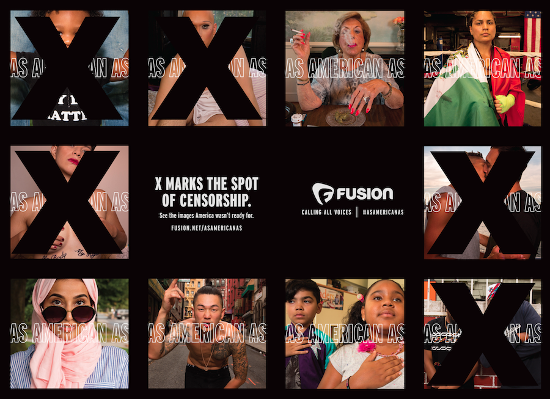 While media partners approved the imagery, the placement in the Lower East Side was taken down due to complaints by the building owner on which the images were featured.

A major Connecticut media company rejected all of the imagery of gay men kissing and a woman holding her covered breasts. After various phone calls, they ended up rejecting all LGBT imagery and, while they agreed to approve some of the photographs, they required that Fusion or SS+K sign a waiver to cover any financial costs related to vandalism of the allotted bus shelters and billboards.

Philadelphia’s Transit Authority, SEPTA, initially rejected the imagery but after multiple rounds of editing, they finally agreed to a set of ads for the Union Station domination out-of-home placement. However, they changed their minds at the last minute and rejected an image of a drag queen standing on a stoop simply drinking a cup of coffee. They also rejected the two gay men because of the appearance of men's' nipples—even though they approved the image of a topless male Asian rapper.