The campaign was created by Clemenger BBDO Wellington 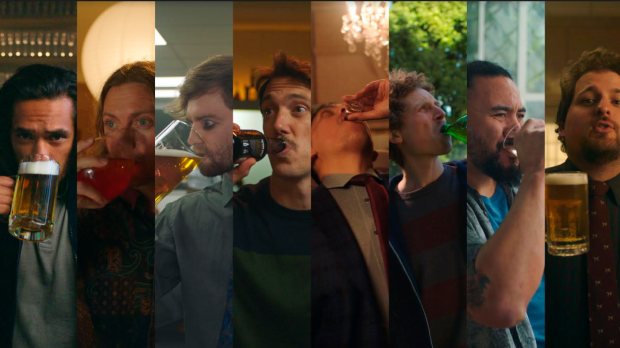 Reality is, they are getting busted. Different guys, on different nights, in different parts of the country are all ending their night the same way. It’s the same old story. Over and over.

85% of drink drivers involved in serious or fatal crashes are male. Rachel Prince, NZ Transport Agency principal advisor advertising says: “We needed a fresh way to land a hard truth with these bulletproof-feeling lads: wherever you are, whatever you’re drinking, if you get in your car at the end of it, you’re setting yourself up for failure.”

Totally Compos Mentis is a campaign designed to evolve over time. It launches with a hero film that stitches together eight stories of lads doing what lads do: drinking at the pub, at a rando’s, at the flashy new tav – with their mates, the boys, the misses. Their paralleled banter and antics combine together into a single narrative, following them as they each tread an all-too-familiar arc: drinking, then driving, then getting busted.

Eight 15 second spots then give deeper snapshots into each of the lads’ nights. Regardless of what they get up to, the decision to get in their car always leads to the same result.

“This is only the first iteration of the campaign” explains Brigid Alkema, executive creative director at Clemenger BBDO: “On this one we traded a Word doc for a spreadsheet to craft eight scripts packed full of interchangeable moments. The films are designed to be infinitely reshuffled, reordered and reworked to keep the message compelling, and the consequences uncomfortable.”

3&7 Director, Steve Ayson, says: “I loved building eight characters, and eight scenes; there was a freedom in letting loose with dialogue with the goal of being able to chop them up different ways. I wanted the viewer to feel the characters progression of drunkenness, so the getting stopped crept in quick…like the feeling when you turn a corner and there’s a checkpoint.”

Watch the films below, and watch this space for the reshuffled edits.