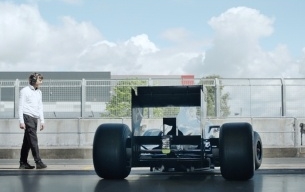 The 360-degree immersive experience places viewers right at the heart of the action on the legendary Silverstone Track, in the seat of of Jenson Button’s Formula 1 race car, with the racing champion himself at the wheel.

Shot on location at Silverstone National Park, the VR film features a race between a Honda Civic Sport, a McLaren 650S and a McLaren F1 Car, to fully demonstrate the power of the F1 car. Jenson Button in the F1 car competes with Stoffel Vandoorne and Kevin Magnussen in the Civic Sport and 650S respectively.

'Fuel Your Senses' was premiered at London’s Race Week yesterday (Tuesday 30 June), with people actually sitting in the cockpit to experience the the film.

“F1 racing is about power, speed and precision. Unless you are a pilot there is no better way to experience it than in VR. I had to hold on to my seat,” says Piero Frescobaldi, Chairman of UNIT9 VR.

“It was fantastic to be able to combine filmmaking and next gen technology. Exploring new visual mediums is what we do best at UNIT9”, adds Jonathan Pearson, Director.