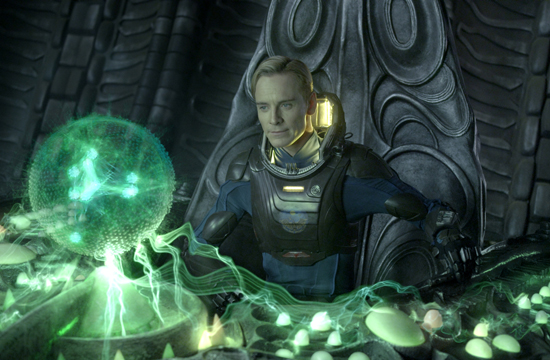 Sydney’s Fuel VFX delivered more than 200 complex visual effects shots for Ridley Scott’s sci-fi epic PROMETHEUS as one of the three lead visual effects vendors on the film. Fuel's work included the design and delivery of key story components such as the ‘Orrery’, an interactive 3-dimensional map of the known universe; bringing life to the mysterious holographic 'Engineer' characters, the architects of the Orrey; and creating the 'Holotable' on the Prometheus's bridge.

Other visual effects work undertaken by Fuel includes the Orrery's control desk effects, the laser scanning probes, the holographic screens in Vickers's suite, and set extensions in the pilot's chamber.
Fuel’s VFX Supervisor and Lead Designer, Paul Butterworth worked closely with Ridley Scott and the film’s overall VFX Supervisor Richard Stammers to help realize Ridley’s vision for these important elements in the story, and spent several months in the design and look development process to ensure the final version of the effects met with the director's vision.
Following Ridley’s approval of the concepts, a team of 80 artists and technicians spent approximately seven months in production at Fuel to further develop the suite of environments, characters and effects, and integrate these into the live action 3D stereoscopic footage.
Complex, detailed and dense, the Orrery alone contains 80-100 million polygons, took several weeks to render a complete shot, and required the development of a custom 'deep image' toolset to successfully deliver. The deep image tools allowed artists to adjust and manipulate specific areas of the Orrery in isolation. This negated the need to redo expensive complete renders when minor changes were requested, and was invaluable to ensure shots could be delivered on time.
Prometheus VFX Supervisor, Richard Stammers said, "Fuel really led Prometheus's visual effects work from a design point of view. Paul and his team repeatedly hit the mark on some very subjective and challenging sequences, delivering some of the most stunning and immersive 3d experiences I have ever seen, whilst also raising the bar to meet Ridley's unique vision of beautiful yet technical holographic imagery."
Fuel’s VFX Supervisor Paul Butterworth: “Working with Ridley and Richard was an incredible experience for all of us at Fuel. Films like Prometheus don’t come along every day, and for us to be given the opportunity to contribute in the way we have, with the design and execution of such important story elements, was very exciting.”
Fuel’s Executive Producer Jason Bath: “To be a major vendor on such a great project was a natural next step for Fuel. Not only were there high creative expectations to meet, but there are complex technical processes to be mastered on any 3D stereoscopic shoot. The support we received from Ridley and Richard, as well as from visual effects producer Allen Maris and Todd Isroelit at Fox was tremendous and greatly appreciated.”
Prometheus premiered in London on May 31, 2012 and is in wide release globally as of June 8.
view more - Creative