From Danone to DxO: Michael Aidan on Following His Passion for Photography

Trends and Insight 565 Add to collection 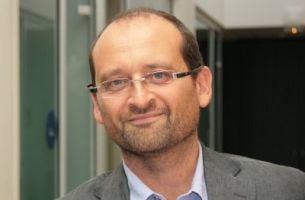 After 28 years in the world of corporate marketing, midwifing the Evian Babies along the way, Michael Aidan was ready for a change. Leading the charge on award-winning marketing for the likes of PepsiCo, Yves Saint-Laurent Perfume, Procter and Gamble and, most recently Danone where he was Chief Digital Officer, Michael was ready for a new challenge. For one thing, he wanted to swap the slow-moving world of big ol’ global corporations for something nimble and energetic… and for another he wanted to find a way of channelling his years of experience into his true passion: photography.

And so DxO was the perfect fit. The company specialises in helping photographers take better pictures with their specialist products and services – and the latest addition to their stable was something that really got Michael’s inner photographer excited. The DxO One is a 20 megapixel camera attachment that allows users to upgrade from smartphone snaps to professional level images. It’s no surprise that it spoke to his inner shutterbug.

It just so happens that DxO founder Jérôme Ménière is an old friend of Michael. Michael and Jerome had been chatting for some months, with Michael chipping in with some free marketing insights. And three months ago Michael took the plunge and joined the company as Chief Marketing and Development Officer.

“Jérôme is a very, very brilliant engineer and in terms of technology he is a visionary. I think he needed someone who knew marketing, business development and digital… basically someone who knew how to tell the story and engage people, whether users, retailers or people in general. He had already been sharing his business questions with me and I had put some thoughts together.”

So Michael swapped the corporate world for the hands-on world of innovative technology. “I’d had some fabulous jobs, but they were beginning to lack the spirit of entrepreneurship. Somewhere like DxO, if you have your hands on the steering wheel you know exactly what happens if you turn it a little left or right and what impact it has. If you’re in a very big boat, you can change things from the inside and be some kind of entrepreneur but you’re not really in charge of the whole picture,” says Michael. In his new role he finds himself working with the banks, suppliers, retailers, as well as working his marketing magic.

It’s also been a fascinating transition to apply his experiences as Chief Digital Officer at Danone to a smaller creative technology company like DxO. At Danone, his rather vague instruction was to turn the corporation into one that was ‘digitally fluent’ – and he spent his time working across the enormous-but-siloed organisation of 100,000 people trying to convince them to get on board. At DxO, he’s pulling together teams in finance, HR, marketing and sales, painting a vision that everyone can get behind.

With the DxO One, Michael has been using his experience and insight to take the 13-year-old company to a mainstream audience. The DxO software and services had previously been exclusively targeted towards professional photographers and so tended to communicate in a highly technical way – impenetrable to the lay person. But in the DxO One, Michael saw a product with potential to engage all sorts of casual photographers and content creators.

“If you are in photography there is one platform above all others you have to engage with. I told Jérôme it was like an amusement park where all your users and potential users are captive. It’s called Instagram. I was told by the whole company 'this is not for us, it speaks to non-Pro photographers',” he recalls. “I had to tell them it was 500 million members, and it spans everyone from the most professional photographers to people who use Instagram to exchange information. Out of 500 million, roughly 80% of people are using filters on Instagram to improve the quality of their image. That means 400 million people are interested in a better quality image that better expresses who they are, what they feel. This is an incredible field of play.”

And so, together with a small, young agency called ‘Bigger Band’, he took the clever camera to Instagram, with a campaign called the DxO One Trip. Over the course of ten weeks, the camera was shared among ten influential Instagrammers, who then used it to shoot their life and demonstrate what the DxO One is capable of and to generate a word-of-mouth buzz.

At the same time, the popular YouTube channel ‘Unboxing Therapy’ reviewed the camera, calling it ‘the best Instagram device ever’. The video was completely unrelated to Michael’s campaign, but it generated 1.7 million views in three days, which reassured them that this online audience was definitely worth pursuing.

But it’s not just photographers and Instagrammers who are feeling the love for the product. The launch film was also shot entirely on the DxO One. It was something of an experiment – while he was fully confident in the camera’s video quality, he wasn’t sure if it could take the place of SLRs like the Canon 7D, the budget filmmaker’s camera of choice. As it turned out, the tiny size of the camera allowed the Bigger Band team to capture shots that they never would have achieved with bigger cameras.

There’s an exclusive DxO One Trip Box that’s for sale in the exclusive Paris store Colette and in 2017 Michael is hoping to turn The Trip into a year-long project.

Speaking to Michael, it’s clear that the DxO One appeals to both his inner marketer and his inner photography nerd. Ever since he pilfered his Dad’s Canon in the 1970s, he’s loved taking photographs and he sees the DxO One as a solution to a problem that bugs many a shutterbug. SLRs can be awkward to cart around on short trips but smartphone snaps can often be underwhelming.

His new role also offers him a blank canvas. “I love the fact that I’m joining at the beginning of a story. My dream, when I was working in the corporate world, was to work for someone like Apple. I knew lots of people working there, but to be honest, what kind of position could I have there? The story has already been written. It’s a beautiful story and people will continue to tweak it and make it slightly better or different. The company I have joined, DxO, started 13 years ago and it has a nice story… but that story hasn’t been told. It hasn’t been expressed in the media, through digital channels and that’s my job. I feel like I’m at the beginning of the book and I’m starting to write ‘once upon a time’.”