From a Tiny Pianist to a Giant Squirrel, Montreal Shows its Quirky Side 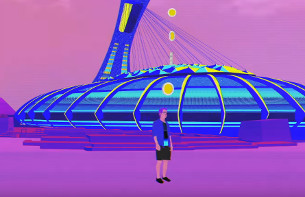 “Giving local artists complete freedom is in and of itself a representation of the city: open, creative, free-spirited and enriching. All qualities that resonate with tourists and Montrealers, and that are at the heart of the campaign’s success to date.” remarks Danièle Perron, Vice-President, Marketing, at Tourisme Montréal.

Here is a synopsis of the four films, which run two to five minutes:

67/76 – Gabriel Poirier-Galarneau 1967 and 1976, two groundbreaking years for design in Montreal. 67/76 celebrates the icons and logos that have marked Montreal’s imagination, relics that have shaped the graphic personality of the city, now aUNESCO City of Design.

The project aims to give a second life to the thousands of photos taken and shared by tourists and Montrealers with the hashtag #MTLmoments. The first four films, also available on the mtlmoments.com/perspectives page,were featured in the “Ignites” campaign, which aimed to promote the city to potential visitors from the eastern U.S.