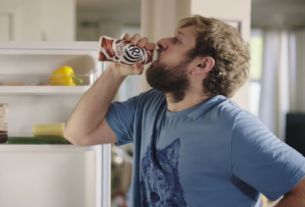 Following a three year hiatus FRijj is back on UK screens with a new TV spot created by VCCP.

Part one of a three part, sitcom style mini-series, the 20 second spot features two housemates (Jonny and Dan) with a penchant for irresistible dairy goodness caught in an ongoing battle over the ownership of the fridge’s… well FRijjs. It seems neither can fight the ‘URjj’ to guzzle a choc-a-chocolate - even if it does moo!

The ad is set to re-launch FRijj as a competitor in the market and follows on from the launch of a new product range earlier this year – including the 40% less sugar Mango & Passion fruit range.

The spot launched on the 5th September with parts two and three to be seeded online over the next few weeks. The social content, also created by VCCP, launched last week on Facebook, Twitter and Instagram along with hashtag #TheURjj teasing that ‘The URjj is coming’.