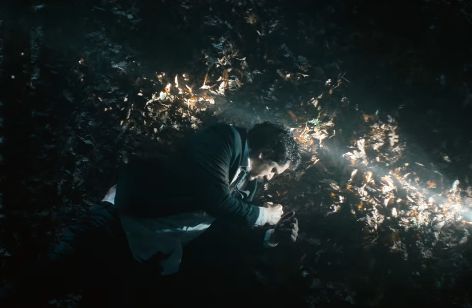 A man finds himself lost in a wood, as night is falling. He finds a torch that shines a dim light and helps him move through the trees, looking for a way out of the blackness closing in on him. This is the opening scene of ‘In the Woods’, the short film commissioned by biopharmaceutical company Dompé to mark World Rare Disease Day, and presented today as part of the #fightforlight social media campaign.

Gabriele Mainetti, director of ‘They Call Me Jeeg’, is the man portraying the plight of people suffering from rare eye diseases. For these people, finding their way ‘back to the light’ is complicated, sometimes leading down the wrong path and involving discomfort, tiredness and an assortment of other difficulties.

The rays of hope are metaphorically represented by the protagonist waking up the next day with his face bathed in light.

“Considering that nature is anything but democratic, the objective to guarantee the same quality of life for everyone is deeply human,” said Gabriele Mainetti. “I believe in research and in its fight to help those who are lost in the darkness."

Created by Saatchi & Saatchi Italy, directed by Roberto Saku Cinardi and produced by Think Cattleya, the video is part of a constant commitment by Dompé to focus its research on identifying innovative treatments for rare diseases.

“With this campaign, we want to continue with the process of helping to shed light on the world of patients affected by rare diseases and their health needs,” explains Dompé CEO Eugenio Aringhieri. “The search for new treatment options is an important part of this world. This is a long and complex challenge, which in some ways evokes the experience of the protagonist in the video and which I am convinced we must pursue as a team, bringing together different perspectives around a single goal: the patient.”

“It is with great sense of responsibility that our company has embarked on the path of research for rare diseases and it is with this very spirit that we support and promote initiatives to raise awareness around this field,” said Sergio Dompé, President of the Dompé Group. “This is a world that is still not very well known today, which is why it is imperative that we continue to carry out research and inform on the value and benefits that this can have on people’s lives.”

In the field of rare eye diseases, Dompé is involved in research and development with the recombinant version of the human nerve growth factor (NGF), a biotech ophthalmic solution being studied in collaboration with clinical centres of excellence in Europe and the USA.

“Rare eye diseases are an area where patients are still waiting for many answers,” says Paolo Rama, Cornea and Ocular Surface Unit Director at the San Raffaele Research Hospital. “Italian research still owes a lot to studies conducted by Nobel Prize winner Rita Levi Montalcini on NGF, a protein naturally produced by the human body and responsible for the development, maintenance and survival of nerve cells, so we are waiting for the results of clinical trials we have conducted, which are expected to bring real innovation to certain areas of ophthalmology.”

“Progress in research and access to innovation are essential for people suffering from a rare disease and represent a real hope to fight and overcome the disease. As a civic movement aimed at protecting the rights of citizens and vulnerable people, Cittadinanzattiva encourages awareness-raising projects such as this. Being aimed at the general public, it can contribute to a greater awareness of rare diseases, which must become an increasingly key issue for public health”, explains Francesca Moccia, Deputy General Secretary of Cittadinanzattiva, who attended the preview of the video.

The short film, which is accompanied by the hashtag #fightforlight to allow sharing online and on social media, can be viewed on the Dompé YouTube channel, together with other backstage content related to the campaign.