French Stars Show Off Their Marvellous Melons for Carte Noire 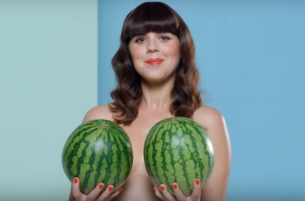 For Breast Cancer Awareness Month, BETC and Carte Noire have created a social campaign under the hashtag #AuNomDesSeins (“In the name of breasts”).

The colourful video features famous French personalities such as singer Micky Green, underwear designer Chantal Thomass and musician Yelle; posing with an object representing their favourite nickname for their breasts. Melons, fried eggs, pears and satellites flash by to the catchy original soundtrack, performed by Yelle.

The humor-filled and pop-inspired campaign encourages women to get regular breast screenings and asks them to post their own pictures on social media under #AuNomDesSeins in order to spread the word.

Shot by young directing trio M.A.L (Control Films), the vivid film has a serious message – to keep the nickname, make sure to book a screening on time.