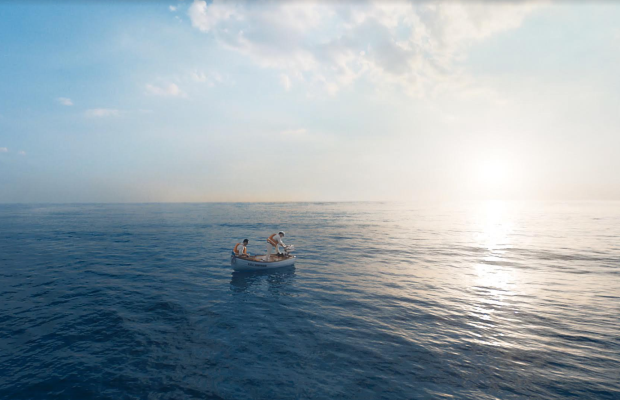 Freefolk have created photoreal fully CG sea and environments for the first in a series of promo films for the new season of I’m A Celebrity... Get Me Out of Here for ITV. The clip aired on Saturday night and a follow-up scenario which receives the most votes will then be broadcast later.

In the film, directed by ITV Creative’s Mike Bladwin, the show’s presenters, Ant McPartlin and Declan Donnelly, are castaway at sea in HMS Bushtucker when they lose their map and are left stranded. Viewers then have the ability to help them find their way to camp by downloading an app and picking from seven different scenarios all of which Freefolk provided VFX for.

You can check out the ident by clicking here.

Across all seven spots, the Freefolk team, headed by their Creative Director, Jason Watts, needed to generate different environment and ocean types to match the various weather conditions they were passing through.

Working on such an ambitious project with fully CG sea and CG environments required a close, coordinated team effort with meticulous planning. Freefolk undertook a great deal of research enabling them to define the look of each scenario prior to the shoot, which in turn enabled them to shoot Ant & Dec with the correct lighting and assess against pre-made environments roughly comped in on set.

Harin Hirani, 3D VFX Supervisor at Freefolk explained the process: “We used Houdini to simulate the water conditions, from stormy rough water to gentle calm water and then added in a sky background. We created additional camera moves to the shots and some water interaction on the lens to give the feeling of it all being shot out at sea. The live action boat was camera tracked so we could use a cg boat to reflect and interact with the water. For the storm sequence we had to do extensive simulation work to generate the foam, water spray, mist, lightning and rain.

The colour department, headed by Freefolk’s Head of Colour, Paul Harrison spent a long time working towards the desired grade to allow Ant, Dec and their boat, to seamlessly sit on the background. The aim was to integrate Ant and Dec into each environment while giving a cinematic feel.

Paul explained, “Mike and I spent a long time finding the right look for each film, we added grain and generally roughed them up a little. We wanted to lose the clean look of the Alexa and go for a more cinematic look for each film.

As a series they had to be in the same world but also be unique so by using a mixture of grain and some proprietary techniques I’ve developed we achieved what we were after look wise, we wanted to distress it for a more vintage vibe. I had the opportunity to explore lots of different looks for some very different scenarios and really used the Baselight to its full potential to create each film’s look and feel. Our film pipeline made the process easier to manage from a colour standpoint and meant that I was getting updated versions as an ongoing process.”

Mike Baldwin was keen to highlight the importance of the VFX, “as this whole project lived or died on the quality of the post, it was essential we found the right post house to take it on board (pun intended). The team at Freefolk delivered above and beyond what anyone expected, leaving Ant and Dec speechless when they saw the final versions. I couldn’t be happier and will miss spending countless hours sitting on sofas while everyone else did all the hard work! It’s been quite a journey. Thank you, shipmates”

Jason Watts went on to say: “there was a great deal of expectation around this project due to both the type of VFX involved and its high profile nature. It was hugely rewarding to have minimal discussion about how the shots were working during the VFX process and this is because everyone was working so well together and is definitely reflected in the results - they speak for themselves!