The group’s New York, Shanghai and Paris offices were awarded a total of 10 prizes 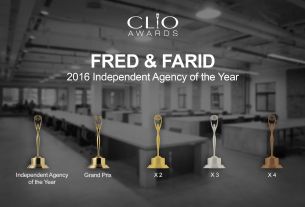 FRED & FARID has just been named Independent Agency of the Year at the 2016 Clio Awards in New York.

This awards haul at the Clio Awards adds to a growing list of awards received in 2016, where the three agencies of FRED & FARID have distinguished themselves in some of the most prestigious creative festivals from around the world, including: