France Catches Up with US Culture with New CANAL+ GoT Ads 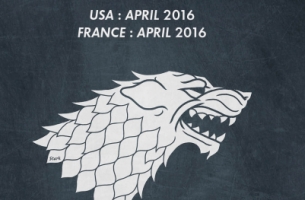 French people often feel frustrated about Americans always having everything first. Some things aren’t an issue for today’s generation, after all chewing gum has been around for 98 years now.

One example, which an American may think is a joke, is that cupcakes only became available in France in 2012.

However, worst of all is the entertainment sector. Movies and series often come out in France up to a full season behind America – so frustrating and unfair! Especially when we’re talking about something as highly anticipated as Season 6 of Game of Thrones!

Thanks to CANAL+ the wait is over, as the channel will broadcast the first episode of GoT Season 6 on the 25th of April at 3am– not one minute behind the US!

To celebrate this, BETC has brought out an illustrated outdoor campaign, highlighting iconic objects that the French have had to wait for.