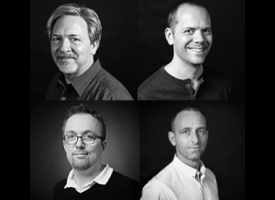 The group has arrived during an exciting year in film for Framestore that has seen it continue its history of great character work with Paddington and Rocket Raccoon in Marvel’s Guardians of the Galaxy, as well as expanding its repertoire with complex environments for the Marvel blockbuster and colossal crowds for Universal’s Dracula Untold.

"As we continue to grow Framestore's Film division globally, we are really pleased to be attracting such experienced supervisory talent. They augment our existing supervisory teams, who are increasingly in demand and, alongside recent promotions of a number of  senior artists to leadership roles, gives us great creative strength in how we pitch for and lead the projects we win," said Joint Managing Director of Film, Matt Fox.

George Murphy has more than 30 years' experience in traditional and digital imagery that have seen him work on some of film’s most enduring moments, from Jurassic Park and Forrest Gump (for which he won a Bafta and Oscar), to the Matrix series and Peter Jackson’s King Kong. He joins Framestore in London, bringing his experience in motion capture to Andy Serkis’ upcoming re-imagining of The Jungle Book.

Alex Pejic and Nigel Denton-Howes also join the London office, with the latter's credits including District 9, The Amazing Spider-Man 2 and Transformers: Age of Extinction. Pejic, who has spent over a decade in the industry, has worked on challenging projects such as The Dark Knight, Inception, and Harry Potter and the Half Blood Prince. He is supervising Framestore’s work on David Yates' 2016 release Tarzan.

Meanwhile in Montreal Stephane Nazé has joined as VFX Supervisor on Joe Wright's Summer 2015 release Pan, where he adds more than 20 years of VFX experience. His credits include Harry Potter and the Goblet of Fire, The Hunger Games: Catching Fire and Guardians of the Galaxy.