Framestore Takes to the Skies in Dizzying New Moneysupermarket Film 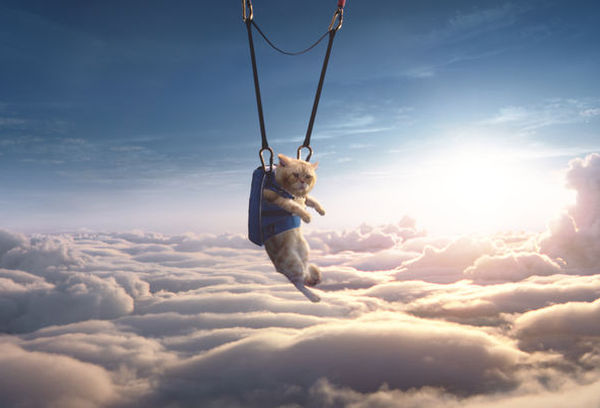 Framestore has delivered VFX and colour grading for Clouds – the new film from MoneySuperMarket. Directed by Matthijs van Heijningen through MJZ and written by the brand's recently appointed ad agency, Engine, the film presents a new direction for the brand, encouraging customers to get “Get Money Calm” by letting them put the aaaaaaaahhhhhhhhhhh in MoneySuperMaaaaaaaahhhhhhhhhhhket.
Clouds was particularly challenging from a VFX standpoint as the concept required it to be shot as one continuous POV shot. It places the viewer in a brightly-lit home which unexpectedly tips, sending all the furniture and you, the viewer sliding unceremoniously through an open floor-to-ceiling window into free fall high above the earth.
While an elaborate production involved a tilting set and stunt woman with a chest-mounted camera, Framestore’s challenge was to seamlessly “take over” the live action shot once the main character has fallen out of the living room. It needed to the take the viewer on a free fall through an entirely CG cloudscape - household objects, flailing limbs and all. Framestore shot all the living room furniture and household objects using photogrammetry in order to recreate them perfectly in CG.
‘The detailed script for the ad provided the answers to a lot of questions very early on like how much time the objects and the protagonist needed to be falling, and what kind of height should they start to level out and fly etc,’ says Framestore’s creative director Jordi Bares. ‘With that information, I could create a sketch early on that showed the position of the living room at about 15-20km above the earth, along with every type of cloud we would encounter throughout the film. We worked out that this allowed for the right amount of time falling before levelling out around 4km above ground level through the tops of cumulus clouds.
‘The sketch also informed us that we needed to create a 3D column of atmosphere through which the main character would fall – and also let Matthijs plan her trajectory as she starts to level out and fly,’ added Jules Janaud, senior technical director at Framestore. ‘We ended up building a vast 12-20 km 3D cloudscape environment backed by digital matte paintings of the horizon and far distance to create the last section of the film.’
To fully achieve the director’s vision, the team at Framestore worked with The Third Floor on an innovative previsualisation of the living room room that features in the film. They created a 3D space which Matthijs could view using a VR headset in order to plan camera movements even before the set was built. This allowed him to plan how he wanted to use the space and direct the trajectory of the POV camera in a really organic way.
The tilting living room shot in the film is actually the result of three different plates stitched seamlessly together by Framestore. Managing the lighting and the transitions across live action and CG shots was a major challenge.
‘The colour grade had to be sympathetic to the VFX so that the flow of the commercial was seamless,’ said Simon Bourne, head of creative colour at Framestore. ‘My task was to showcase the textures of the house and its items falling into the sky and the reality of depth and contrast to the world below. For all of this – and the magical point above the clouds – the colour had to have lots of dynamic layers to make sure the commercial looked filmic and natural.’
‘Even by our standards, this was a hugely complex job that required a lot of problem solving to realise what was a really ambitious concept,’ adds Bares. ‘Matthijs van Heijningen and the agency put a lot of faith in us and I couldn’t be prouder of the result - it’s a real tour de force of Framestore’s collaborative capabilities.’
Clouds aired in the UK on 9th March during The Voice on ITV.
view more - Creative