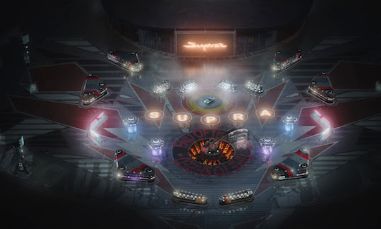 The much anticipated relaunch of a car with a cult following needs a debut that is larger than life, and Framestore helped to do just that for the all-new 2020 Toyota GR Supra. The spot, which highlights the Supra’s performance as it races through a giant pinball game, was created in partnership with award-winning director and frequent Framestore collaborator Marc Forster, and Saatchi & Saatchi. It debuted during the 2019 Super Bowl and was the top performing spot of the game based on incremental search engagement generated, producing more than 25 times the online activity as the median commercial, according to marketing analytics company EDO. On February 17th, the spot also aired during the legendary Daytona 500.

Led by VFX supervisor Michael Ralla and Senior VFX producer James Alexander, Framestore’s team was approached early on by Forster to help solve the challenges of creating an automobile sized pinball game for the Supra to race through. The entire process was a close and extensive collaboration with Forster, as well as cinematographer Matthias Koenigswieser and production designer Andy Reznik, which meant prep more closely resembled a feature film than a traditional commercial. Research for the spot included thorough analysis of close up footage of various pinball games, inspiring subtle references and nods to classic games in the final film.

The team scouted the New Mexico based location, and did a preliminary, to scale, drone-based photogrammetry reconstruction of the course. Then, with rough prop designs and the final arena layout, the Framestore team completed a thorough previz in collaboration with The Third Floor, and under the guidance of Forster and Koenigswieser, which became a precise guide for the shoot execution on set.

The Framestore team helped to coordinate the placement of the practical set build, which was created using scaffolding affixed with large light arrays, and which provided a wide variety of colors and in-camera lens flares reminiscent of the complex lighting inside a real pinball machine. Using a drone over the set, a live video feed overlaid with the blueprint schematics provided instant feedback on how closely the set build matched the previz. In addition to the hundreds of aerial drone survey images, a combination of 25 laser scans were used to serve as a base to create a highly accurate digital representation of the enormous set, which would eventually become the foundation for additional full CG shots.

With the exception of the basic arena layout, portions of the floor graphics, and the light tunnel, the Framestore team designed every aspect of the pinball machine. Framestore worked on each stage of the process, starting with rough 3D kitbash models to find the visual language and style Forster imagined in pre-production, and later creating fully fleshed-out builds of every object during post-production. All bumpers and flippers had to be built in 3D and incorporate Toyota branding and the Supra legacy design elements. It was crucial to keep everything grounded in reality, so that despite their size, every element was still believable and could have been physically built using real life materials. Each asset was then carefully lit and integrated into each shot.

Though the pinball game was comprised of CG elements rendered on top of the on-set props, it was important that the star of the spot, the Supra itself, showed off its true driving performance in camera. The stunt driver’s skilled and dramatic handling of the car contrasted nicely with its unique paint finish, which gave the car an otherworldly glow.  Each CG shot was derived from real, match-animated driving performances, while Koenigswieser used virtual cameras to capture new angles and shots.

The final spot successfully brought together every department from conception through to post production, resulting in a beautiful film unique from other car commercials.