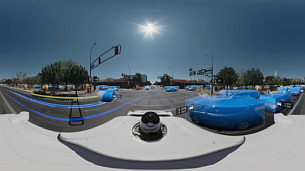 Framestore partnered with Waymo (formerly the Google self-driving car project) and Google Creative Lab on the Waymo 360° Experience, a short film that picks up viewers for an interactive spin in Waymo’s highly anticipated self-driving vehicle. In development since 2009, and now making up the only fleet of fully self-driving cars on public roads, Waymo proved the ideal subject for a 360° journey, giving the wider world an invaluable insight into our driverless future through seamless pairing of live action and graphic elements.
Framestore’s William Bartlett and Mike McGee co-directed the film, shot on location in Arizona by Framestore’s live action unit, led by David Hay.
Briefed to showcase the feel of travelling in a Waymo car, and to uncover some of the mystery surrounding Waymo’s technology, the team utilised 360° camerawork to great effect, allowing viewers to put themselves within the vehicle (either through YouTube or a compatible headset like Google Cardboard). The all-access view works to illustrate the range and depth of Waymo’s sensors, whilst shedding light on both the interior and exterior of the modified Chrysler Pacifica Hybrid minivan, in a prime example of state-of-the-art storytelling.
On the road, Framestore worked with a combination of bespoke 360° camera rigs and drones to capture the requisite array of shots. The team was able to capture footage across authentic traffic and junctions to show Waymo’s intelligent behaviours in action. The challenge of 360° shooting, as always, came in the technical choreography of the shoot: balancing exposures and syncing activity across the camera’s multiple lenses. It was also critical to capture the optimum canvas on which graphics could be overlaid to fully demonstrate what Waymo ‘sees’ all around it.
In post, there could be no errors. The camera system had captured footage across four sides at once; the stitching therefore needed to be spot-on to combine perfectly with data from Waymo’s drive. Once stitched, the scenes were tracked, before the illustrative design elements, which were designed by Google Creative Lab based on real-time data from Waymo, were layered in.
The resulting film is now live and accessible through Waymo channels, educating global audiences about a new era of transportation. Of course, for Framestore’s team, the biggest thrill came in a demo ride in a real-life Waymo vehicle; we’re assured, the future (of transport) is speedy, intelligent, and bright.
view more - Creative