Awards and Events 305 Add to collection

The studio wins in the 'Innovative Digital Craft' category 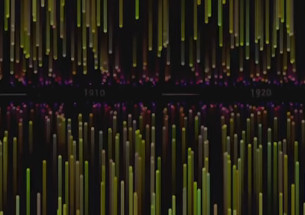 Framestore Labs have received honours in the Innovative Digital Craft category at the Art of Creativity, awarded for the ‘Timeline of Modern Art’ project developed and designed for Tate Modern.

The AOC looks to bridge the gap between production companies and distinguished art world curators, to facilitate future collaborations between the two sectors and help broaden the concept of art. The jury is a mix of high profile curators and directors from across the art world. The other esteemed AOC project shortlisted for Innovative Digital Craft is Jam3’s ‘Songs of Gallipoli.’

The ‘Timeline of Modern Art’ is a 6.5 metre-long interactive touchscreen that brings together over 3,500 works of art by 750 artists, using custom-built software and graphic displays. The Timeline is a significant update of the previous static installation in the gallery, and  allows millions of visitors instant access to a vast number of artworks previously hidden in the Tate's impressive and rich archives. Developed by the Labs team, led by Tom Schwarz, the Timeline is both an educational tool and a beautiful addition to the gallery’s Level 0.

“Working with an institution as prestigious as Tate gave us enormous scope, and an opportunity to push our creative to the max,” says Tom Schwarz, Installation Director, Framestore Labs. “The output had to be aesthetically stunning, and it is an honor to see the installation’s artistic merit recognised in the AOC Awards”.

The Timeline is typical of the Framestore Labs ethos, bringing the data of complex businesses like museums and art galleries to life in dynamic, easy-to-understand visualizations. Their objective is to design stories that cause viewers to pause, connect and become immersed in the brand experience.

Framestore Labs will participate in each of the AOC Panel and Screening Discussions hosted by Soho House. The winning teams will screen and discuss the creative elements involved in producing unforgettable work with Soho House members.

Three separate panels will take place across the US and UK:

The ‘Timeline of Modern Art’ will also be shown by the AOC at the MOCA in London on September 27th.