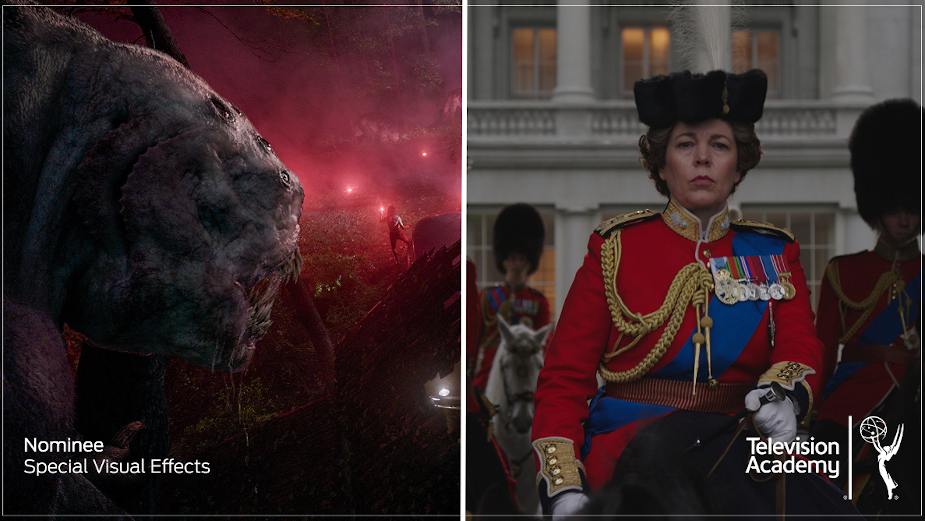 For Lovecraft Country, Framestore worked closely with the show’s producers and showrunner Misha Green to provide a wide array of stunning VFX work. While designing, building and animating the fearsome Shoggoths serves as the clearest indication of Framestore’s work, the show also required environment builds, digi doubles and FX work, as well as input from Framestore’s renowned in-house art department. For an overview of the creative studio’s work, click here.

From the overt to the invisible, Framestore’s work on The Crown helped immerse millions of viewers in the show’s epic fourth season. Nominated for its work across the ‘Gold Stick’ episode, Framestore seamlessly built out the world surrounding the royal family with a number of digital set extensions and replacements (notably the iconic Buckingham Palace exterior) as well as employing innovative ‘deep fake’ techniques to replace an equestrian athlete’s face with that of Erin Doherty (Princess Anne) for a scene that featured a showjumping sequence. For an overview of Framestore’s work on season 4 of The Crown, click here.

James Whitlam, Framestore’s managing director - Episodic, said: “On the face of it The Crown and Lovecraft Country couldn’t be more different, but they’re ultimately united in their need for seamless, world-class visual effects that help support and propel their storytelling. In a way they showcase the alpha and omega of our work here at Framestore, from otherworldly creatures to impeccable ‘invisible’ VFX, and we couldn’t be prouder to be nominated for Emmys for both titles. A huge congratulations to our clients, to Grant Walker, Andrew Scrase, Oliver Bersey and Standish Millennas for their nominations, and to all the Framestore artists who worked on these shows.”

In addition to The Crown and Lovecraft Country, Framestore also provided VFX work for Disney+ title WandaVision, which was nominated for the Outstanding Special Visual Effects In A Season Or A Movie category.