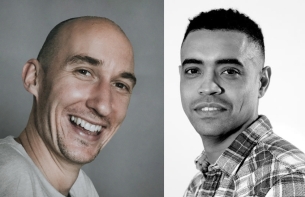 Framestore is expanding its design department with the appointment of Anthony Gibbs and Duncan Elms as Design Directors in the Los Angeles office.

Anthony and Duncan will continue to grow the skillset of Framestore’s design department while offering greater integrated opportunities for both Framestore’s West Coast and global clients. Framestore’s design capabilities are world-renowned having done award-winning title sequences for James Bond films and the international craft festival, Ciclope.

“We are thrilled to expand our design department in Los Angeles with Anthony and Duncan,” said James Razzall, Senior Executive Producer of the Los Angeles office. “They both have an impressive portfolio designing high-level creative work with strategic thinking for a number of big-name clients. At Framestore, more and more clients are coming to us looking for smart design thinking in addition to our other capabilities. We are recognizing how design is becoming more of an integral part of developing creative solutions for our clients, and we are confident that bringing on Anthony and Duncan will raise our offerings to the next level.”

Anthony has been an integral part of Framestore's design department since joining the UK office in 2007, working on a wide range of projects from online films forMulberry to graphics sequences for BBC Comic Relief and The National Television Awards. He recently creatively directed the F1 broadcast graphics and directed projects for Nokia, The National Television Awards, iRobot, The Financial Times andCosmos, a sequel to the award-winning 1980s science documentary series. He was art director on the focal point of Somerset House’s critically acclaimed Valentino Exhibition – a stunning five meter animated rose installation.

Anthony started his career in interactive online content; since then, he has dramatically expanded his skill-set and portfolio, mastering styles and techniques across the design spectrum. In Los Angeles he will continue to mix new elements within his work, and draw inspiration from his new environment.

Duncan is an award-winning motion designer and director, having created content for film, TV and online. While working across a broad range of design styles, he specializes in infographics and the visualization of increasingly big data in clear and engaging ways. Duncan has been shortlisted for the Information is Beautiful Awards for three consecutive years. His ‘Bitcoin Explained’ video also struck a chord on Vimeo, where it has been played over 900k times.

Duncan started his career in Australia before moving to the U.S. His portfolio includes work from major clients including BMW, Google X, Samsung, Nike, Nissan and Greenpeace. He has also worked on numerous successful films and TV series including Insurgent (2015), Deep Web (2015) and Hungry Beast.