Around 170 people worked on the film’s VFX at Framestore 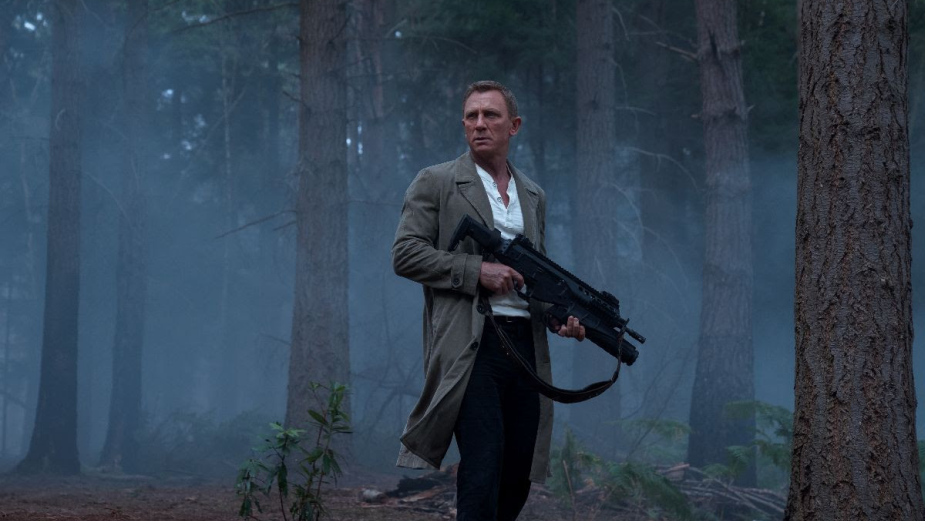 From car chases to dramatic snow-covered environments, there was nowhere for the team to hide when adding CG elements into a shot. They received detailed references and scans to help them conjure everything from forests, icy lakes and mountainous landscapes. Says Jonathan Fawkner, VFX supervisor: “It’s hugely satisfying to be able to put something into a shot that is so invisible that you know when you’ve done a good job because no one can see it.”

Directed by Cary Joji Fukunaga (Maniac, True Detective), No Time to Die continues Bond’s longstanding tradition of jaw-dropping setpieces, dazzling cinematography and practical filmmaking. “I really enjoyed working with Cary”, says Fawkner. “With his background as a Director of Photography he has a very strong aesthetic sense.”

The opening sequence required bespoke environmental R&D work. Shot on location in Norway in spring against a dramatic sunset, the team needed to replicate the look and feel of the shoot plates whilst changing the season to snow-covered winter. Says Benjamin Loch, VFX Supervisor, “The decision to base the look of the sequence on one of the sunset plates really paid off and the results provided the artists with a balanced image-based reference of all elements with the lighting composition of every shot baked in..

”For one very stylish sequence set in London, the studio created a vista of the skyline, as well as a new glass building in the heart of the city. “They wanted a very specific beautiful view of the city and they wanted it to be sunset,” adds Fawkner. To get the position of the sun where they wanted it, the crew shot the scene at sunrise although additional details created a believable sunset, including animating traffic and adding trains, car headlights and the surrounding architectural lights.

Despite the major stunts being shot practically, ensuring continuity was a huge part of Framestore’s supporting role, with one of the adrenaline-filled car chases requiring the choreographing of a Land Rover, three Toyota Landcruisers, motorbikes and a helicopter,.Fawkner says “other than dressing in higher mountains, the majority of the work was adding continuity, moving CG vehicles and stunt ramps from the shots and then replacing terrain.”

Working on No Time To Die was a dream project for Framestore. Says Loch, “the franchise was always a firm favourite growing up, and my pick of choice was always one from the Bond ‘VHS’ collection.”

Around 170 people worked on the film’s VFX at Framestore, as well as the team at Company 3, who provided colour. A separate team of 40 Framestore artists worked solely on the opening titles, Daniel Craig's last gunbarrel sequence and the Billie Eilish music video for the title track. Starting with GoldenEye in 1995, No Time To Die marks the seventh time the creative studio has worked closely with Daniel Kleinman to create a Bond title sequence, having fostered a partnership with the director that’s brought in multiple industry awards.