Foyles & LIDA Dream Up a Solution for Sleepy Readers with Boo!mark 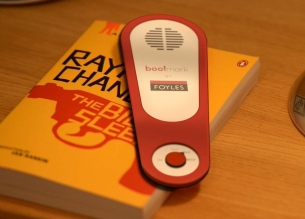 On 1st April, digital and direct marketing agency, LIDA, teamed up with the iconic independent bookseller Foyles, and got involved with the April Fools’ Day action. Together they revealed “Boo!mark” – a new technology that monitors breathing patterns, detects snoring and prevents people falling asleep when reading in bed.

The launch of the innovative product aimed to demonstrate the breadth of Foyles’ brand and bring the concept of reading to life. Using patented (pending) technology, Snornar® technology - a play on Snore and Sonar – the product aimed to gently ‘boo’ a person awake from their slumber, if they’re falling asleep whilst reading.

To mark the ‘launch’ of ‘Boo!mark’, LIDA developed a 60” second spot demonstrating how the new product is set to work. The opening scene shows a man sat up in bed illuminated by a small table-lamp and intently reading a book - an alarm clock by his side shows it’s very late. Highlighting the purpose of the new product, a voice over (VO) softly says: “some books can’t be put down. Even if you have to be up early.” We then see the man’s eyes closing as he drifts off to sleep in an uncomfortable position.

Nicky Bullard, Executive Creative Director, LIDA commented: “What a lark.  There’s nothing more frustrating than heavy eyes when you’re at a crucial bit in the story, so this could almost be true.  In fact , I think we should do it for real.   In the meantime, ask a friend about the last book they couldn’t put down, then borrow it!”

Helping Foyles break into new territory with this April Fools’ Campaign, the new work follows on from the success of the Big Bus Challenge where LIDA came second.

Simon Heafield, communications manager of Foyles, added: “We had a lot of fun working with LIDA on this initiative. April Fools’ Day jokes are a great way of showing the personality of a brand and the people behind it. I love this idea because it suggests a playful solution to a problem the vast majority of readers will have experienced. This campaign ultimately highlights that we're a company of book readers, and we're delighted that LIDA are helping our brand and that message reach a whole new audience.”