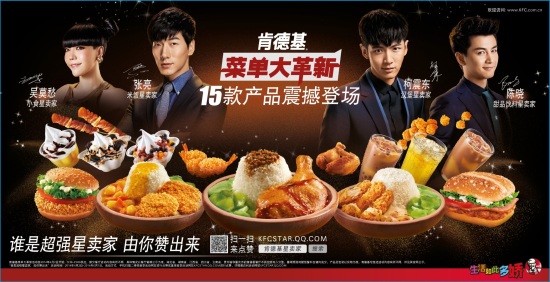 To create awareness and customer engagement around this newly revamped menu from KFC, Ogilvy & Mather Advertising, Shanghai (“O&M”) is launching an innovative digital campaign that features four big Chinese celebrities competing against one another to promote the 15 drinks and dishes. The celebrity promoters will each market a set of items linked to their persona, by appealing directly to their vast fan base in every corner of the country through social media. The promoter who engages with the highest number of fans online through ‘likes’ for their respective menu items will win the challenge.

Known for his sweet and romantic appeal, silver screen heartthrob Mr. Ke Zhendong will sell two chicken burgers with the line “I can’t buy you a castle, but I can buy you a burger,” a play on words as the Chinese characters for castle and burger are one character apart.

Model and actor Mr. Zhang Liang, famous for his warm-hearted portrayal on a reality TV show, will market three rice dishes that are traditionally a warm comfort food in China.

Mr. Chen Xiao, who is best known for his rendering of a warrior monk in period pieces, will surprise fans by going against his ascetic character to sell six kinds of drinks and desserts.

Following an online teaser video, two more videos that introduce the celebrity promoters and launch the new menu will go live on TV and online via the campaign website, banner ads and KFC’s official weibo (Chinese microblog) account. The character behind each celebrity truly comes alive, as fans are directed from engaging content on each star’s weibo handle to the campaign website. Fans can enter a virtual store on the campaign site to learn about the products, play games, comment with fellow fans, and ‘like’ their favorite celebrity promoter’s products.

To bring the online engagement offline, fans are also invited to vote on which city they want their favorite celebrity promoter to visit for an in-store appearance. They can create and download onto their mobile phones do-it-yourself collectible electronic coupons that are customized for each celebrity, to be used in stores. Outdoor print ads and in-store signage with stylized shots of the food will fuel the online engagement, as will a steady stream of ‘promotional tactics’ launched by each celebrity for the duration of the campaign.

“Since our early days in China, KFC has been at the forefront of innovation in the food industry. Our newly revamped menu is the latest chapter of our growing relationship with Chinese consumers,” commented Mr. Milind Pant, President and Chief Operating Officer, Yum! China. “For our extraordinary menu revamp, we wanted an extraordinary campaign that will reach customers at any time of day in any city in China. O&M has hit the spot with a forward-thinking, social media-driven campaign that we believe will stand out, get people talking and drive them to try our delicious new items.”

Mr. Graham Fink, Chief Creative Officer of Ogilvy & Mather China, said, “O&M and KFC China have partnered for over 20 years, during which KFC has become a part of the fabric of China. This latest campaign marks an ambitious new stage for KFC. Digitally savvy, socially interactive, ambitious in scale, aspirational yet approachable…the campaign itself is a reflection of the ever-evolving Chinese consumer.”