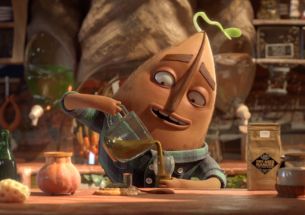 Seed Matters, an initiative of the Clif Bar Family Foundation, today launched “Mr. Seed,” an animated short with a clear message: our food system is f*cked, but we can fix it.

Through the satirical voice of a clean-living, dirty-mouthed organic seed voiced by comedian Pete Holmes, the film directly challenges the narrative put forth by big agrichemical companies that only they can feed the world, and highlights the virtues of organic seed as a solution. The film was conceived for Seed Matters by The Butler Bros, a brand design studio in Austin, and directed by renowned Los Angeles-based animation company, Buck. Music and sound design for the film were created by Antfood.

The film opens with an animated ad for fictional Pharm Foods, panning across an idyllic farm and a family at the dinner table. Only ominous cues—dead birds, anthropomorphized food—hint that something isn’t right in this world. It seems that this cabal of GMO seeds has sold the masses on such delicacies as manure-based smoothies and emasculating “performance-enhancing” chemicals.

Mr. Seed emphasizes the benefits of organic seed compared with the chemically-dependent alternative.

“Is this what America wants to eat?” the film’s hero asks. “Unlike those GMO bros, organic seeds like me can feed the world without ruining it because we keep it clean. We don’t dirty ourselves with all those pesticides.”

“Organic seed needed a voice that couldn't be ignored so its advantages could be shared broadly,” said Adam Butler, Founder and Strategic Chief of The Butler Bros. “Mr. Seed was born to be that voice, and now it is thanks to an ambitious script, a brave client and an epic collaboration with Buck.”

People are more aware of where their food comes from than ever before. According to a new study by Sullivan Higdon & Sink FoodThink, 65 percent think it's important to know how their food is produced. However, few are asking what it comes from. In the U.S. the same six chemical companies that make pesticides (aka “The Big Six”) control 63 percent of the seed market, which has led to adverse effects like the nutrient decline of 43 crops, more than $15 billion in human health costs in 2005 alone as a result of agricultural pesticide exposure, and an overall food system that is unsustainable.

Seed Matters advocates for the improvement and protection of organic seed to ensure healthy, nutritious and productive crops are able to feed people now and in the future. Its mission is to conserve the genetic diversity of crops, promote farmers’ roles and rights as seed innovators and stewards and reinvigorate public seed research and education.

“With Mr. Seed, we hope to raise interest and awareness in organic seed and increase conversations about changing our chemically dependent food system,” said Matthew Dillon, Director of the Seed Matters Campaign. “We want to show people that there are alternatives, that they have a choice and a role to play in the solution.”

“The Butler Bros were fantastic partners from the get go,” said Buck Creative Director, Ryan Honey. “They conceived of the idea of Mr. Seed and brought Pete Holmes to the table, who is an amazing comic talent, but they also supported our creative vision. It was great to have a partner that saw our passion for the project and worked with us creatively to make a better film.”

Mr. Seed invites viewers to take further action by signing a letter it will send to U.S. Department of Justice. In it, Seed Matters expresses concern over the seed industry consolidation trend among agricultural chemical companies, and asks the DOJ to examine antitrust implications of mergers such as Dow-DuPont and Bayer-Monsanto.