Inside In-Housing 0 Add to collection 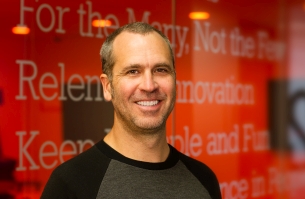 Fuhu, Inc., the creator of the award-winning nabi tablet – the world’s first Android tablet built for kids – and the foremost innovator in technology for kids and families, has hired renowned advertising creative Rob Palmer as its new Chief Creative Officer. Palmer brings to Fuhu world-class advertising experience, having led teams at Wieden+Kennedy, Goodby and most recently Razorfish in developing and orchestrating campaigns for iconic brands as Apple, Coca-Cola, ESPN and Ebay.  At Fuhu, he will be developing and overseeing the creative vision and strategy as well as building a high-caliber internal advertising agency designed to support the company’s explosive growth.

Palmer’s work has contributed to a number of iconic advertising campaigns such as Tiger Woods “Hackeysack 2” and Nike’s “What are you getting ready for.” He launched iMac Colors within “Think Different”, “Videogame” for Coca-Cola, and ESPN’s “This is SportsCenter” which even became a Harvard Case Study. His work has garnered awards including Cannes Lions, CLIOs, and One Show Pencils. He also has an Emmy and the MTV Moonman.

Palmer will build an internal agency that further transforms nabi brand into a household name. From product specific creative executions to bigger Fuhu branded initiatives, Palmer will lead both the traditional and digital advertising strategy aimed at creating memorable campaigns that underscore Fuhu’s core values of delivering and inspiring happiness and show the world what they can do through its products and services, while maximizing buzz and demand for the nabi product ecosystem.

The appointment of Palmer and the bolstering of its in-house creative capabilities comes as Fuhu continues the rapid expansion of its award-winning portfolio of hardware and software enabled digital experiences and solutions, and further asserts its presence as one of the world’s most cutting edge brands.  Fuhu has seen sales of its nabi branded products and services rise close to 160,000% over the past 3 years. Its success has helped the company garner huge accolades including being named Inc. Magazine’s  #1 Fastest Growing Company in America for both 2013 and 2014, and being honored by Forbes magazine as #1 Most Promising Private Companies in America. Most recently, Fuhu was listed on the Fast Company 2015’s World’s 50 Most Innovative Companies – ranking  #4 Most Innovative Company in Consumer Electronics and #24 Most Innovative Company overall, worldwide.

“Rob is a seasoned creative mind who will be a tremendous asset to the company as we continue to grow and look to effectively and creatively tell our story,” said Jim Mitchell, CEO of Fuhu.  “Advertising is key to communicating why Fuhu is truly a kids tech trendsetter and why our nabi products are groundbreaking.  Having Rob build out our internal advertising and marketing capabilities enables us to streamline the approach with a team immersed in fully understanding the purpose and solutions we present to kids and families.”

Palmer added, “Fuhu is breaking new ground in the family technology space and I am psyched to have the opportunity to help them craft their story.  Building an in-house agency is the purest way to create work that really captures the soul of the company. At the rate we are growing and innovating, there is no substitute for total immersion – we will be living and breathing daily the ethos of Fuhu and its larger mission.  I came to Fuhu as I feel they are creating a true revolution, one in which they are empowering kids to make a difference and become their best creative selves through its products and digital experiences.”