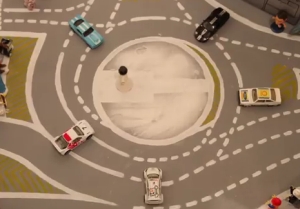 Ford Europe has launched a short stop-motion video on its YouTube page parodying the biggest hits of YouTube in 2014.

Entitled ‘Yule Tube’, the inspiration for the film is the daredevil stunt driver Ken Block.

The short film took five nights to shoot, at about 5-6 hours each night. The buildings in the 'driftmob' scene were made from soft drink multi-can boxes, and the mountain scenes used expanding foam.