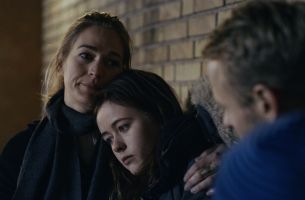 Functionality has often been the focus of Ford's communication, but with a completely new approach, Ford is exploring difficult emotions in a brand new setting. Ford Denmark has created an alternative to the more traditional commercials by making a short film in three parts about the everyday drama of a family.

'The Family' launched as a short film telling the story of a struggling family going through a divorce. With Denmark currently experiencing a higher amount of people getting divorced than in the last 10 years, Ford Denmark addresses a range of difficult emotions that many Danish families can recognize. Despite the new family pattern, there is hope at the end of the tunnel.

'The Family' has been developed in collaboration with Ford Denmark who, with this unconventional theme, wants to challenge the glamorous images that car commercials typically paint of the happy family on the road to new adventures. Instead, the film focuses on everyday life, where extra energy can be in short supply in a family where the familiar life is disrupted.

Kristine Dam Jensen, Marketing & Communications Supervisor at Ford Denmark explains: "Ford wants to challenge the way people think and experience advertising. We want to engage consumers in a different way by talking to their feelings - both the positive and the negative. By creating a film that is based on one fragmenting family, we tell the story that new family structures can result in positive new ways of living.” The film is a new variation of the theme 'Success Against the Odds' that Ford Denmark introduced with the films about the Danish surf collective Oh Dawn, photographer Kenneth Nguyen and Noma chef Søren Westh.

Lene Dahlquist, Communication and Public Affairs, Ford Denmark adds: “At Ford Denmark we believe that people and their needs come first. If people are to succeed, the right conditions must be present - and although things may be about to fall apart, Ford would like to position itself as a backbone in family life, that you can always count on.” He continues: “The car is a gathering point for the family. This is where we meet and part and where we have time to talk – it facilitates everyday challenges."

"We believe that there is a huge potential in this format, and we are proud to help Ford Denmark take this big step," says Thomas Bjerg, CEO of Very. He adds: "We are very excited to work with Ford Denmark who has had the courage to take on an issue as important as this one. Ford has had confidence in the insight and strategy behind this project."

Film director Daniel Kragh-Jacobsen commented: "My ambition with the short film was to tell a story about making it through challenges. There have never been so many families divorcing, as is the case in Denmark in recent years. But the new family structures can also result in positive new ways of living. My film serves as a voice in the debate on family constellations and I believe that we are going to see many different constellations of families in the future." He added: "I am proud to be working with Ford Denmark, who has had the courage to get involved in this project where other brands would pass."