Forbes Announces the World's Most Valuable Sports Brands for 2015

Nike retains its title as the most valuable sports business brand 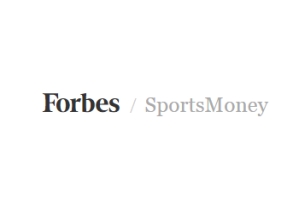 Forbes today announces its 2015 list of The World’s Most Valuable Sports Brands. Also known as the ‘Forbes Fab 40’, the list identifies the 10 most valuable sports brands in each of four categories of businesses, events, teams and athletes. The key findings of these rankings are as follows.

Nike retains its title as the most valuable sports business brand, having increased its value from $7.5bn in 2007 to $26bn today - comfortably ahead of third- and fourth-placed Adidas and Under Armour, worth $6.2bn and $5bn respectively

Sky Sports comes fifth in the sports business brand list and, with a valuation of $4.6bn, is behind second-placed ESPN the second highest ranking sports broadcaster

The Super Bowl tops the list of most valuable event brands, ahead of the Summer and Winter Olympics in second and third place – and with a valuation of $580m that is greater than that of the FIFA World Cup and UEFA Champions League combined

The Forbes article announcing the Fab 40 list can be viewed here.