For the Love of Film: 12 Days in Tribeca

The Influencers 340 Add to collection

INFLUENCER: Deutsch producer Joe Pernice on the screenings and parties that make the Tribeca Film Festival so special 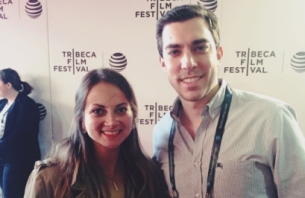 As the 15th annual Tribeca Film Festival wraps up, the filmmakers, the staff and those who had the opportunity to experience it all get to rest from the 12-day whirlwind that was more than just a film festival. I’ve experienced this festival from all angles. Back in the day, I was the Executive Assistant to Jane Rosenthal, the Festival’s co-founder. Then, during the festival in 2014, I had my directorial debut for Chasing Yesterday, my feature narrative which had a special screening at Tribeca Cinemas. And this year, I had the opportunity to experience it all the best way anyone could – as a guest and a film-lover.

The Tribeca Film Festival started off with a simple mission – to bring 50,000 people to lower Manhattan over the course of four days, not just to entertain, but to help re-build the city after September 11. Since then, the festival has contributed close to one billion dollars of economic impact to downtown Manhattan and it joins Sundance and Cannes as one of the most prestigious film festivals in the world. But what makes Tribeca so much more than a festival is the ever-evolving program of screenings, interactive exhibits, filmmaker conversations, out of the ordinary cinematic experiences and more.

In its second year, Tribeca’s ‘Festival Hub’ at Spring Studios brought us the best in technology, innovation and experiential storytelling. There were an amazing amount of Virtual Reality exhibits – and these weren’t the gimmicky VR projects we are used to seeing. These projects were rooted in storytelling – a showcase of documentary and narrative VR filmmaking. More than experiencing and enjoying the technology were the conferences held around it. ‘Hacked by DEF CON and Mr. Robot’ was the world’s largest underground hacking conference and TFI Interactive day brought together tech and gaming geniuses, for an all-day forum exploring storytelling in the digital age.

One of my favorite programs at Tribeca is the ‘Tribeca Talks’ series. What started with the ‘Directors Series’, where some of today’s most distinctive auteurs discuss their craft, has now expanded to what the festival calls ‘Storytellers’ – pioneers who never stay in one lane. These are people who write, direct, produce, act and more. I was fortunate enough to catch Tina Fey’s sit-down with Damian Holbrook (writer at TV Guide), Tom Hanks with John Oliver and J.J. Abrams with Chris Rock. After an hour-long discussion about how they ‘made it’ in the industry, the conversation opened to enthusiastic audiences. It’s an amazing opportunity for anyone to ask their idol just about anything they want.

The films are the reason why we all visit the festival. Of the 6,739 submissions, only 101 films made the global list. I didn’t have the opportunity to see even close to all the films, but I enjoyed a few premieres including the Katie Holmes-directed ‘All We Had, Children of the Mountain’ directed by Priscilla Anany (winner of the Best New Narrative Director award) and a handful of narrative and short documentaries.

Just as good as some of the films are the after parties. Open to filmmakers and a selected few, Tribeca hosts some of the most amazing parties. It’s an opportunity to mingle with not only the up-and-coming filmmakers but also the established A-listers. You never know whom you’re going to meet or what’s going to happen. At the after party for the short ‘The Gospel’, Alicia Keys got up and covered some songs from Prince (I didn’t make this one but heard it was great). The industry is about networking and these parties are the place to network. For me, it was my opportunity to promote the June 3 release of my film Chasing Yesterday, and to give some advice about the process to young filmmakers and to take some advice from the established.

Once again, the Tribeca Film Festival was a huge success. It’s amazing how something so great can keep getting bigger and better each year. It’s even more amazing to think how a festival that started with a goal to bring in 50,000 people has filled millions of seats over the last 15 years.

Joe Pernice is a producer at Deutsch