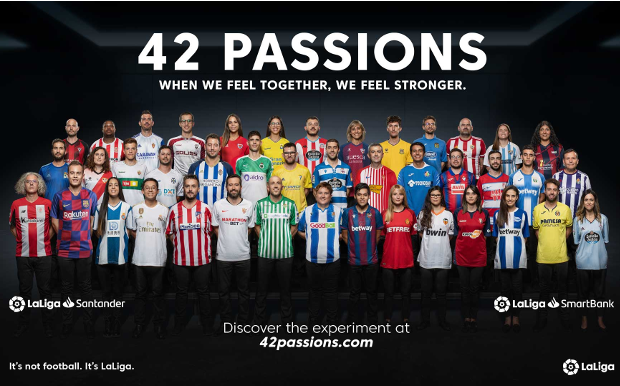 In order to launch their new musical identity, LaLiga synchronised the hearts of football fans’ while they sang it.
All the participants were fans of different and most importantly, rival football clubs. The outcome, rivalries can be put aside, the love for football is the same and unites everybody.
The experiment was inspired by a scientific study carried out by the University of Gothenburg, Sweden, which linked the synchronisation of heartbeat rates of different people due to the emotions felt during singing the same song. 42 fans of different LaLiga clubs were chosen from 4000 volunteers, from both LaLiga Santander and LaLiga SmartBank clubs, to take part in the campaign’s sound experiment. The experiment took part in Madrid and was conducted by a Spanish cardiologist from the Clinico University Hospital in Valladolid. The frequency and parameters of each participant’s heart rate were monitored with the help of cutting-edge technology, linked to a screen where the specialists supervised all fans’ heart rates.
Lucas Vidal, Spanish prodigy and composer of LaLiga's musical identity, unified the choir and set the tempo for the song. Contact among the fans was prevented and everybody wore black shirts to conceal their team allegiance. At the end, 100% of the subjects’ heart rates matched one another and synchronised to perfection during the song.
“The passion for football is something that all fans share. Sometimes rivalry makes us lose sight of that. At LaLiga, we are convinced that football is a great link that connects and brings together everyone who loves the sport.” declared Enrique Moreno, LaLiga’s global brand and assets director.
“Since the ideation, we looked to do an experience that unites all the rival fans hearts, not in a metaphorically approach, but in a real and tangible way.” added Raquel Martínez, McCann Madrid creative executive director.
“It was amazing to see how they worked together, no matter where they came from or what club they represented. Everyone was under the spell of the LaLiga soundtrack. They felt it and made it their own.” said Lucas Vidal, the composer of LaLiga's musical identity.
view more - Creative