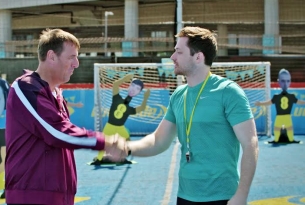 EE, the UK’s most advanced digital communications company, announces the launch of exclusive online series, The Wembley Cup.  Created in partnership with popular YouTube star Spencer FC, the 10-part series documents Spencer’s journey as he brings 28 of the biggest football-obsessed online personalities together to fulfil their dream of playing on Wembley Stadium’s iconic pitch for the grand final.

The Wembley Cup web series launches on Saturday 18th July and can be viewed on EE’s own website, ee.co.uk/WembleyCup, and on Spencer FC’s YouTube channel, which has nearly 700k subscribers.  The first nine episodes will focus on Spencer’s ‘road to Wembley’ journey as he builds a team of fellow YouTube stars to take on rival web personality Miniminter (2.5m subscribers)  and his Sidemen United team – composed of other football-loving YouTube personalities – in an epic Wembley showdown.

Each episode will show Spencer giving his fellow YouTubers a new challenge to help select his starting 11 as they prepare to battle with Miniminter’s team.  The series combines both the digital and physical worlds of football, including a session with professional coaches at the FA’s National Football Centre at St George’s Park, a challenging game of ‘footgolf’ – a play on the traditional sport where a football is used instead of a golf ball – and of course, some mental training playing football-based console games.

England star Andros Townsend showed his support for the series with a surprise guest appearance and joins a host of other talent who appear alongside the YouTubers including Matt Le Tissier, Martin Keown, Ray Wilkins and women’s under 23’s England star Melissa Lawley.  Townsend appears in one episode to take the YouTubers on at a football video game but at a place he’s very familiar with, Wembley Stadium.  To launch the series Townsend also challenged Spencer FC to a special game played out across the huge Wembley scoreboards.

Andros Townsend said: “I’ve been fortunate enough to spend quite a bit of time at Wembley when playing for England, but to play a console game of football on the giant screens was a new experience altogether. Slightly less pressure of course, but Spencer and the guys certainly put me through my paces.  I’m a big fan of what these guys are doing on YouTube and looking forward to watching the Wembley Cup series as it unfolds to see who came out on top.”

Three new episodes will be released each week in lead up to the grand final played on Wembley Stadium’s hallowed turf and released online on Saturday 8th August.  Further content will be distributed on EE’s own social channels and shared across all of the competing players own online channels. Those following the series will be encouraged to show their support online by using #WembleyCup.

Spencer McHugh, Director of Brand at EE, said: “We are always looking at exciting new ways to bring our Wembley partnership to life, and a collaboration with these phenomenally popular YouTube stars – who between them have over 25m subscribers and 3.5billion video views – seemed like the perfect opportunity to entertain their football-loving audience.  An online series on this scale, involving 28 YouTubers and a host of sporting celebrities, has never been done before.  We hope those tuning in will enjoy the completely unique content we’ve created with this ambitious project.”

Since EE’s partnership with Wembley Stadium kicked off last year, EE has introduced many technological advancements to the stadium including delivering a significant network upgrade to more than double 3G and 4G capacity, ensuring fans can stay connected during events, as well as working with the Wembley team to deliver the first official Wembley app and roll out mobile and contactless payment facilities.