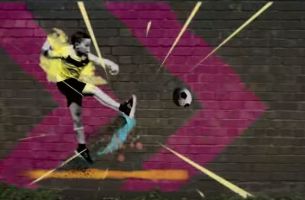 Capital One have just released a series of three films, which highlight how no one achieves their dreams alone.
Directed by UNIT9 Films duo Greg & Jacob, the aim for the #thedifference campaign was to align the Capital One brand with a message of support, told through the lives of three young British footballing heroes – Ross Barkley, Fran Kirby and Nathaniel Kirby. Their tales are manifestations of Capital One’s belief that people flourish with the right support.

All three stories are journeys through adversity to reach success and in all three, the support that the players received along the way was the defining factor in creating that success.

They’re inspiring, emotive tales of triumph against the odds, of setbacks and comebacks, of triumphant returns to form. Told in the words of the players themselves, they acknowledge a debt to the people and places that have supported them on their journey.

Each film has a unique feel, created by Greg & Jacob to best communicate the challenges each player faced. The camera literally places viewers in Barkley’s shoes to tell the story of his broken leg. Kirby’s triumph over depression is told in a physical abstract style to portray the hostile emotional environment that she emerged from. The walls of the SW4 estates that Clyne grew up in are brought to life by local artists and animators to tell his life story,

“Each film had its own challenges, as each story is told in a completely different way. They were shot back to back over 6 days, so we were fully immersed in all three stories simultaneously. One minute our minds were on how best to strap a camera to our 8-year old talent in Wavertree, the next they were on how we would animate a particular wall in Stockwell,” say Greg & Jacob.