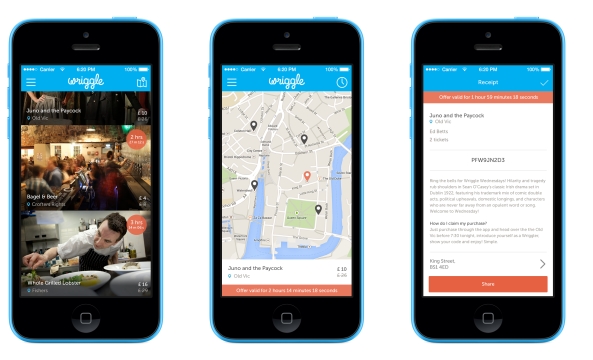 A mobile app called Wriggle, picked as one of the best start-ups in Europe, is launching in London after a successful launch phase in Bristol. The app gives high-quality independent local businesses the chance to monetise their unsold capacity, by offering consumers last-minute deals.

Wriggle London is launching first in Islington, Shoreditch, Camden and King’s Cross on November 26th, and will expand into other areas in 2015.

Wriggle features on the day eating, drinking and going out experiences. It gives users the incentive to fill independent’s unsold spaces via a special offer only available to them.
Here’s how the process works:
1. The Wriggle team handpicks the best independent outlets in an area
2. The independent business creates an offer to target unsold capacity on-the-day
3. The user sees a selection of reduced-price last-moment eating, drinking and going out experiences nearby
4. Transactions are made over the app - payment is sent directly to the outlet, minus a commission for Wriggle
5. Users enjoy local businesses for less.
The start-up launched in May 2014, and since then the Wriggle Bristol app has been downloaded over 8,000 times, bringing 2,000 new customers to local businesses, and getting rave reviews from the app’s business customers.
Its launch phase has been so successful that it was a Winner of leading European accelerator Seedcamp in September 2014, picked as one of the top seven start-ups in Europe, and raised £156,000 from 200 investors in a crowd funding campaign as a result.
It also won the Best App Award in October 2014 at the SPARKies, which reward the best tech companies in the South West, and took home business incubator SETsquared’s annual Innovation Showcase Award for 2014.
Wriggle CEO and Founder, Rob Hall, said; “Wriggle’s mission statement is to support independent local businesses - and our results so far have been excellent. We work really hard to pick out great places, and it’s hugely satisfying to see that our users like them as much as we do. Increasingly, people want to support local, and we help them to do that. Winning Seedcamp means that our investors believe we have big potential, and the extra money means we’ve been able to fast-track our London launch.”
view more - Creative