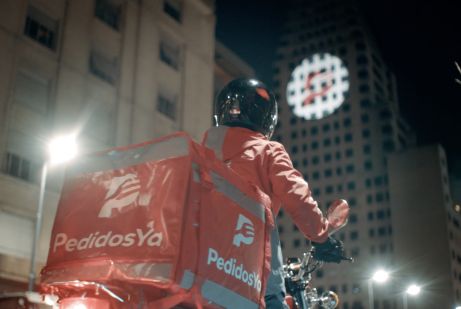 The campaign, which is live now on digital and social media across Argentina and may be lined up for TV over the coming weeks, embraces a superhero aesthetic and parodies the iconic comic-book Bat-signal to bring to life the message that, however hungry you are, Pedidos Ya is on hand to save the day.

The work shows Pedidos Ya delivery drivers arriving to tend to the needs of customers – from a mother preparing dinner who finds she is out of grated cheese, to a group of friends watching the football in need of beer, to students whose coffee supplies have run low.

In each clip, the delivery driver is shown arriving to see a ‘Pedidos Ya’-style parody of the Bat-signal projected onto one of Buenos Aires’ most iconic buildings – illustrating how, whatever situation customers find themselves in, Pedidos Ya will save the day.

Impero was added to the Pedidos Ya roster last September, and has helped drive a 145% uplift in sales for the brand between November and January.

Federico Stier, managing director of Impero Buenos Aires, said: “We loved working on this campaign. It’s a great way of showcasing Pedidos Ya’s super-hero credentials: whatever your food or drink crisis, Pedidos Ya is on hand to save you.”

Mariano Ramallo, head of marketing at Pedidos Ya, said: “Impero have created some very strong work for us, and this campaign is another great step forward in a fantastic relationship. The Bat-signal parody is a great way of bringing to life our point of difference: we care, we are there for our customers, and no matter where they are or what time it is, we will go to super-human lengths to make sure they don’t go hungry or thirsty.”